Disappointment For Donovan As Title Fight Is Postponed

THERE was bitter disappointment overnight when it was learned that Eric “Lilywhite Lightning” Donovan’s EU title fight against Marion Alfano in Brescia, Italy on next Saturday night was off as the Kildare man had picked up a sparring injury. 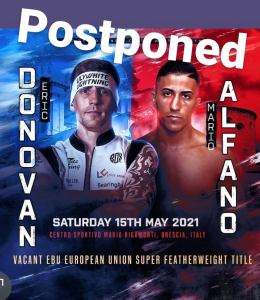 Taking to his Official Twitter Account on Saturday morning, Eric said “I am absolutely gutted to announce that my EU European Title fight on 15 May will have to be postponed. I have picked up a bad injury to my ribs in a recent spar which has put me in an unfit position to fight next week. Thanks to all my team, sponsors, and fans. The goal still remains.”

This is certainly a bitter disappointment to Donovan and all his fans in Kildare and throughout Ireland. He was really up for this fight when he spoke to the Kildare Nationalist on Thursday. All his hard work had been done he said and it was just a matter of remaining match ready over the next week.

A new date will be announced for the fight once the Kildare man returns to full fitness.