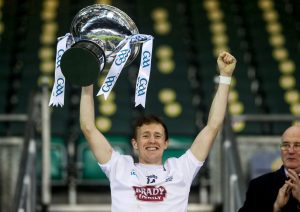 As flagged by Herity at his media briefing last week, the major additions to the squad are Johnny Byrne and Declan Flaherty of Coill Dubh and James Dolan of Eire Og Corra Choill who will each add strength to a panel that is a nice mixture of experience and youth even though the likes of Brian Byrne, James Burke and Jack Sheridan could still be described in the “youth” category but each carries a wealth of experience at this stage.

In the absence of the retired full back, John Doran, the Kildare Manager will look to build his team around the vastly experienced and inspirational Niall O Munieachain and Paul Divilly with Johnny Byrne, who retired from intercounty football late last year, and Declan Flaherty will add superbly in that department.

Simon Leacy, Cian Shanahan, Rian Boran and Cathal McCabe are players for Kildare supporters to get excited about.

Kildare open their Allianz League Division 2B campaign with home fixtures against Donegal and Derry before travelling west to take on Roscommon and Mayo.

Promotion out of Division 2B is a priority for Kildare in 2021.