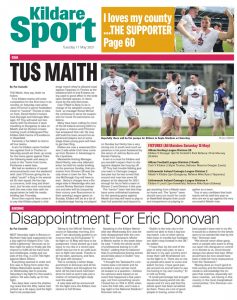 GAA: In depth analysis, facts, figures and interviews on Kildare’s NFL opener against Cork in Thurles

Extensive preview of Kildare’s NHL 2B match in Newbridge; Promotion or bust for Herity

The Supporter excited about the return to play

CAMOGIE: Previews and squad announcements for Kildare’s League matches against Meath (Away) and Louth (Home)

CRICKET: Halverstown ready for the return to action

….and Much More in your Kildare Nationalist out now.