LIMERICK’S Hurler of the Year, Gearóid Hegarty has been selected as the Gaelic Writers’ Association (GWA) 2020 Hurling Personality of the Year, with Tipperary manager David Power winning the football accolade. Recently retired Kilkenny journalist, John Knox has also been honoured with the GWA Lifetime Achievement Award. The PRO of the Year award went to Tipperary’s Joe Bracken, who left office last year after five years. 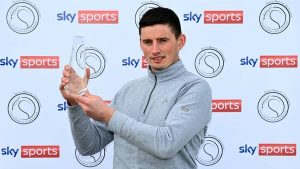 The GWA Awards are sponsored by SKY Sports.

Hurling Personality of the Year Award  winner, Gearoid Hegarty, enjoyed a standout season for Limerick, which culminated in a stunning All-Ireland final display where the wing forward ace knocked over seven points from play to land his and Limerick’s second title in three years. St Patrick’s man Hegarty went on to land an All Star and was named Hurler of the Year for his outstanding form throughout the 2020 campaign.

The 26-year-old schoolteacher, who also played senior football for Limerick, comes from a rich hurling tradition, with his father, Ger a former All-Ireland finalist with the county.

The Football Personality of the Year Award goes to David Power, who masterminded his native Tipperary’s first Munster football title win in 85 years. Power previously guided the Tipperary minors to All-Ireland glory in 2011 – just the county’s second national title at that level – and to back-to-back Munster titles the following year. The Kilsheelan man also managed the Tipp under-21s and had a spell as Wexford senior football boss.

This year’s GWA Lifetime Achievement Award goes to John Knox, the long-serving Kilkenny People journalist and sports editor, who retired last year after 46 years with the paper. The Dicksboro clubman has been covering big games on the club and county scene, including 26 All-Ireland finals, since joining the Kilkenny People as a junior reporter in 1974.  Knox landed a MacNamee award from the GAA in 2000 and was Kilkenny Yearbook editor for over a decade.

The PRO of the Year is Tipperary’s Joe Bracken, who recently vacated the role after serving the maximum five years, during which he coordinated the Premier County’s media affairs with great competence and efficiency, particularly in their All-Ireland hurling winning seasons of 2016 and ’19.  The Moycarkey-Borris club man was well known locally for his weekly ‘GAA Scene,’ which compiled news from all over the county.