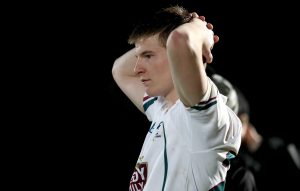 The side is boosted by the return to the squad of the Coill Dubh pair of Johnny Byrne and Declan Flaherty. Byrne, now retired from intercounty football, slots in at centre half forward, while Flaherty is an interesting selection at centre half back.

The team contains eight of the team which started the Christy Ring Cup Final against Down last December with a further three who made impressive substitute appearances on the day while Goalkeeper, Paddy McKenna, who missed the Final through illness, returns between the posts with the excellent Mark Doyle stepping down to the bench.

With likely full back replacement, Niall O Munieachain, injured, Rian Boran, who was outstanding in the championship last year, slots into the No 3 position where he will be flanked by the experienced Cathal Derivan and another good performer in 2020, Simon Leacy. Clane’s, Sean Christanseen, joins Flaherty and Kevin Whelan in the half back line as Cathal Dowling and Paul Divilly continue their midfield partnership.

Johnny Byrne is flanked in the half forward line by the Naas pair, Kevin Aherne and James Burke, with Jack Sheridan dropping to the bench, an excellent player to have if needed on the day. Captain, Brian Byrne, will again line out in the full forward line, at top of the left, along with Tadhg Furlong and another great impact sub from last year, Shane Ryan, now lining out at full forward.

Despite the absent players this is a very powerful selection by Herity and his Management Team and one that should start the promotion ball rolling against Donegal on Saturday. Donegal, the Nickey Rackard Cup Champions, have a game under their belts, having beaten Roscommon last weekend with a late goal from full forward, Ronan McDermott. Manager, Mickey McCann, has named the same team for Saturday with Declan Coulter leading the charge from midfield and Danny Cullen providing the ammunition from wing forward.

The match will be refereed by Chris Mooney, from St Patrick’s Palmerstown, Dublin, who refereed the Christy Ring Cup Final between Kildare and Down.