Athy native, Eric Donovan, has fought many challenges, both inside and outside the ring, in his illustrious boxing career, both as an amateur and as a professional including having the biggest fight of his career postponed last week because of a rib injury. Still today Eric remains a fountain of inspiration, courage and encouragement to many in Kildare, Ireland and across the world including students, sports people and business people.

ERIC “Lilywhite Lightening” Donovan should have been fighting the biggest fight of his career last Saturday night when he was due to face Mario Alfano for the EU Title in Brescia, Northern Italy. Alas, as we reported last week, a serious rib injury to the Athy man forced the fight to be postponed. 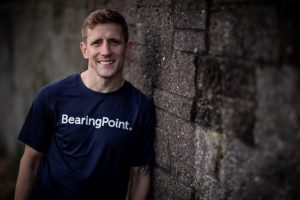 A new date will be found once O’Donovan has sufficiently recovered from injury.

This is but a small set back in the life and career of the 35 year old Kildare man who has had to deal with many challenges, inside and outside the ring, that has seen him become five-time Irish National Champion and win bronze medals at the 2009 EU Championships and 2010 European Championships.

Eric fell out of love with boxing and retired before turning professional in 2016 and since then has had 14 fights with 13 wins and just one loss and is on the cusp of capturing a European title.

“The truth of the matter is I feel like today I’m living an extraordinary life and I feel like I’ve got a second chance. All my amateur career I absolutely blew so many chances although I won an awful lot too,” Eric tells us. What’s even more remarkable about my success in my amateur career is that I was in active addiction. I was dealing with mental health issues but I couldn’t talk to anybody.”

“I was suffering in silence, leaning on crutches like drinking and smoking to get through life. I knew it was wrong but I didn’t know how to stop.”

Donovan added, “I got to the stage where my life just became miserable and I hated myself and I hated life and I hated boxing because I couldn’t properly fulfill my true potential because of what I was doing to myself outside of the club and outside of the ring. Today I’m living a free life, a happy life. I spent so much time trying to find happiness; they call it the high cost of low living . Today it’s the low cost of high living.”

Eric Donovan says that there are so many good people in active addiction and that what’s attached to addiction is shame and guilt and remorse and these all drag a person down. “That’s why I thought people would be better off without me but then I made a change in my life because I didn’t want to be there anymore. I didn’t want to die but I didn’t know how to live. That’s the place it brought me to.”

“It brought me to my knees and then I was able to ask for help and when I asked for help, I finally got straight with Eric. I was always so proud but the graveyard is full of people with pride. I was too proud to ask for help, too proud to show what I believed was weakness but it’s actually a real paradox because in asking for help it’s a sign of strength,” he continued.

The “Lilywhite Lightening”, who is now a motivational speaker for schools and business and on Monday was addressing the Dublin Chamber of Commerce as part of his ambassador role with, BearingPoint Ireland, hadn’t realised the amount of joy he brought to people through boxing. “I wouldn’t have realised that before but Laura, my fiancé, made me aware of that. I’m a lot more aware of that myself nowadays and I do understand that my words are important and the message that I share and deliver does have a wider impact and it does a lot of good.

While feeling a little uneasy about exposing himself, Eric believes it’s the price he has to pay to help another person and he’s happy with that. “I want my two kids to look at their Dad; he fell down so many times but falling down is part of life but it’s when you stay down that’s when you get concerned. When you don’t get back up that’s when the alarm bells go off. I tell my kids that in life they’re going to get knocked down or going to fall down and but that’s OK; just get up again.”

“At one stage I couldn’t get out of the bed, couldn’t face people, I couldn’t face the world. Now I realise that life is for living not to be endured. We shouldn’t have to endure life. We’re not there to exist we’re there to dream and to spread our wings and to try things and take risks. Life is all about creating moments. My tag line now is, Chasing Dreams Making Memories.” he adds.

“I lost control in my amateur days but wouldn’t it be great to put the finishing touches to my story in a very honest way so that when I do eventually hang up the gloves, if I’m European Champion when I do, that will be the dream of my lifetime,” Eric Donovan concludes.