SIGNIFICANT  rain has fallen over the past 24 hours which mean that an inspection called for 7.30am Saturday morning to agree whether Day 1 of the Guineas Festival will be able to proceed at  The Curragh. 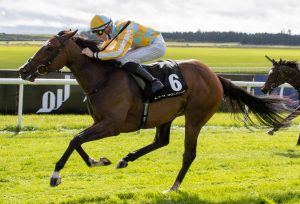 Pretty Gorgeous favourite for the Irish 1,000 Guineas at The Curragh on Sunday Photo: INPHO/Morgan Treacy

The O’Brien family will lead a very strong challenge on Sunday with Joan of Arc, recent winner of the 1000 Guineas Trial, one of three runners trained by Aidan O’Brien, while son Joseph, will be represented by three runners including Pretty Gorgeous, winner of the Group 1 Fillies Mile last year.

The Ken Condon trained Miss Amulet also features among the runners, while No Speak Alexander, Zaffy’s Pride and Fantasy Lady are other notable Irish trained runners.  The Richard Fahey trained Fev Rover, third in the English 1000 Guineas, is the sole British trained runner in the €400,000 race.

Comer Group International Irish St Leger winner Search For A Song and Serpentine winner of the Epsom Derby feature among the 8 runners in the Tattersalls Gold Cup.  The €300,000 Group 1 race has also attracted Broome, Cayenne Pepper and the much-travelled True Self winner of the Neom Turf Cup in Saudi Arabia earlier this year.

12 of Europe’s top colts will line up in the 100th running of the Tattersalls Irish 2000 Guineas on Saturday. Declared runners were published yesterday.

English 2000 Guineas winner Poetic Flare and Lucky Vega who finished third in the Newmarket contest will renew rivalry in the Group 1 Classic.

Other leading contenders in the €400,000 contest include a strong challenge from Aidan O’Brien with Battleground, Van Gogh and Wembley. Trainer Kevin Prendergast, who has won the race twice with Awtaad and Northern Treasure, is set to be represented by Monaasib, while trainers Donnacha O’Brien, Joseph Murphy and Andy Slattery will look for their first Classic race success with Emporio, Agrimony 7and Rebel Step respectively.

La Barrosa trained by Charlie Appleby and The Rosstafarian trained by Hugo Palmer are the sole British trained runners.

The Archie Watson trained Glen Shiel, winner of the British Champions Sprint last year at Ascot, heads the 12 runners for the Weatherbys Ireland Greenlands Stakes with Hollie Doyle in the saddle.  The strong British trained team also includes Summerghand trained by David O’Meara and the Charlie Hills trained Royal Commando.  Sonaiyla, Make A Challenge and Speak In Colours are among the home trained team in the Group 2 sprint.

The GAIN Marble Hill Stakes also taking place on Day 1 of the Festival has attracted 9 runners including Castle Star, recent winner of the GAIN First Flier Stakes, Cadamosto and The Entertainer trained by Aidan O’Brien and the Jim Bolger trained pair Celtic Times and Strapped.

“It’s great to see such a competitive field for the Irish 1000 Guineas. Pretty Gorgeous has been popular all week and has over taken Joan Of Arc as favourite, with the pair now 2/1 and 5/2 respectively.

“It’s great to see Richard Fahey with another top class horse and his Fev Rover, who was a gallant third at Newmarket is next best at 5/1.”

Ground: Following 34mm of rain in the last 24 hours, the ground is as follows:

Round – soft to heavy