Hattrick For Johnny As Kildare Hurlers Win In Style

JOHNNY Byrne hit a hat-trick of goals at Hawkfield as promotion-chasing Kildare comfortably got the better of Derry in a National Hurling League encounter. 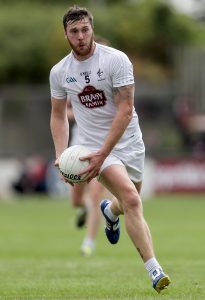 A former inter-county footballer with the Lilywhites, Byrne’s final contribution of 3-4 supplemented additional three-pointers by James Burke and Conor Dowling as Kildare made it two wins from as many games in Division 2B.

Despite the scoring prowess of Derry full-forward Brian Cassidy, the influence of Paul Divilly and Brian Byrne ensured Kildare held a slender 0-6 to 0-5 lead at the first half water break. The sides were level on no fewer than six occasions during the opening period, but David Herity’s Lilywhites eventually created daylight.

Superb goals from James Burke and Johnny Byrne in the 29th and 31st minutes respectively propelled Kildare towards a 2-10 to 0-10 interval cushion.

Another brace of Johnny Byrne majors followed shortly after the resumption to place the final outcome beyond all doubt. For the second week in succession Conor Dowling bagged a goal as a substitute and while Cassidy rattled the net late on for the Oak Leaf men, it could do little to dampen the mood within the Kildare camp.