NOT surprisingly Kildare Hurling Manager, David Herity, has kept faith with the 15 players who started against Donegal for Sunday’s Allianz NHL Round 3 game against Derry at the Manguard Plus Kildare GAA COE in Hawkfield, throw-in 4pm. 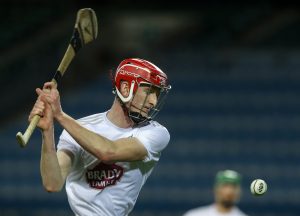 Last Saturday’s 15 secured the first points in the 2021 Hurling League with a 27 point demolition of Donegal (4-29 to 0-14) and set the Lilywhites on the road to the stated aim of promotion from Division 2B.

A goal either side of half time by James Burke (one from a penalty and one from play) gave Kildare the impetus to drive on in the game and further goals from Johnny Byrne and substitute, Conor Dowling, completed the task in style. Indeed Donegal goalkeeper, Luke White, made two fine saves in the first half, one from close range from Kevin Aherne and one from the penalty spot from James Burke.

Kildare are still without the services, through injury, of Niall O Muineachain and Mark Delaney, among others, but Herity has included David Slattery, another absentee from last weekend, among the substitutes for Sunday.

Kildare have a decent record against Derry and in the last five games it’s been three wins, one loss and one draw. However the Lilywhites have to go back to the Christy Ring Cup semi-final in Inniskeen for their last success over the Oakleaf county. Two years ago Derry were the victorious in Newbridge  while last year’s encounter in Derry ended in a draw, a result that hardly helped Kildare’s chances of promotion.

Derry lost their opening game against Mayo, 0-21 to 1-16 but didn’t play last weekend. Their team for the Kildare game is drawn from just three clubs, Slaughtneil (8), Kevin Lynch’s (5) and Banagher (2) and the Slaughtneil lads, in particular, will be used to playing at the highest level with the club.

Kildare have won four matches on the trot now and although Sunday will be tough, including the conditions, there is now enough guile, determination and ability to see this one across the line also.