KILDARE Camogie Manager, GT Troy, has made one change to his starting line of the the Littlewoods Ireland Division 2 Round 3 Camogie League match against Westmeath in Manguard Plus Kildare GAA Centre of Excellence, Hawkfield on Saturday, throw in 1pm. 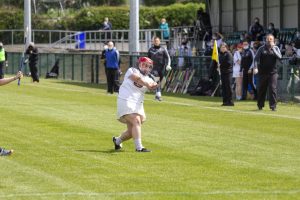 Lea Sutton popping over another point for Kildare against Dublin on Saturday last Photo: Aisling Hyland

Una Delahunt (Ardclough) comes at left corner back with Kelly Perkins (Naas) moving to the bench.

Kildare opened their League campaign with a 3-7 to 1-19 loss to Meath in Dunganny but the potential shown in that game came to fruition last weekend when Kildare powered to a 4-12 to 2-11 victory over Dublin. The team has shown the potential to score goals, seven in two games is a great return.

Both Ciara Egan and Derbhile Byrne, she now has three to her record, scored two goals each last weekend while Emma Kielty and Lea Sutton also chipped in with goals the previous week. Sutton, Siobhan Hurley and Emer Reilly can also take their points when the opportunities present themselves. At the other end Tanya Johnson has proved herself to be a very sound keeper.

Westmeath have full points from their two games having beaten Dublin 1-10 to 2-5 in Round 1 and scoring a 3-7 to 0-12 victory over Meath last weekend. The midlanders will be firm favourites for the game but such is the confidence that GT Troy has built into his team this year and coupled with the momentum from last weekend’s victory over the Dubs then a Kildare victory cannot be ruled out.

In This Week’s Kildare Nationalist Sports….