FORMER Kildare captain, Eoin Doyle, has recovered from the leg injury which forced him to leave the field in the second half of the game against Clare on Sunday last last, an absence which many felt contributed to the Lilywhites downfall in the game. Good news then for Jack O’Connor who must again do without the services of current captain, David Hyland and Daniel Flynn. 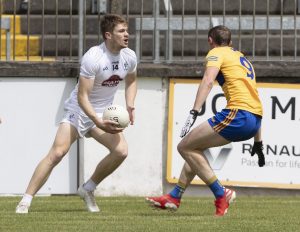 Doyle slots into his former No 6 position with Shea Ryan, who started in that position against Clare before surprisingly being substituted at half time, moving to Doyle’s corner back position for this game.

Half time substitute last weekend, Fergal Conway, starts in place of youngster, Alex Beirne, and in positional switches Kevin Feeley is sited at centre half forward, Darragh Kirwan at full forward and Neil Flynn at top of the left.

While Kildare were disappointed to lose at home to Clare last Sunday, Laois have been defeated by Clare and Cork and are languishing on the bottom of the Division 2 South Table with no points and a points difference of -15.

The sides last met in the League in Portlaoise in March 2020 in the last match before lockdown and, just as for this Sunday, it was a crucial game with both teams in relegation danger. Kildare, however, rose to the occasion and won the game on a score line of 0-15 to 0-10 beginning a run of four victories on the trot which ended, unfortunately, in that Leinster semi-final defeat to Meath.

There was huge expectation from the Lilywhites after the defeat of Cork in Round 1 but, not for the first time, the consistency that Kildare craves deserted them again and another disappointing result was the outcome.

A victory for Clare and Kildare would see them both advance to the Division 2 semi-finals, any other results then it’s time to get the calculators out. If Kildare can repeat the periods of the game that saw them overcome Cork and lead Clare by 0-7 to 0-4 then they have a great chance of reaching the semi-final. Anything below that standard then they will be looking at the other side of the table.