We Are Where We Are But Is That Enough – The Supporter

IT is quite remarkable how shocked and annoyed we all are when our footballers fail to come up to scratch. There’s an online forum that is a darker spot than the darkest of dark webs when the Lilywhites have let us down. Be warned. 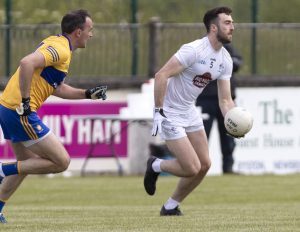 We shouldn’t be so surprised. We should know better. Despite the benefits of population, a relatively wealthy one at that, proximity to the capital that immunises us somewhat from emigration and gives most of our players an easy commute to training, Kildare is a strong football county in name only.

Let me remind you. It is twenty-one years since our last provincial senior title. We have won just two of those since 1956 and even that was our first for twenty-one years. Since 1956 we are fourth on the roll of honour in Leinster, just one win ahead of Louth (1957), Laois (2003) and Westmeath (2004).
Offaly have won all ten of their provincial titles in that time, Meath have added thirteen. Dublin have gone to infinity and beyond.

We are heading inexorably towards the centenary of our last All-Ireland at senior level. Louth have won Sam since then, while late starters Meath are on seven despite their first not coming until 1949. Offaly, with a population of 78,000, have brought home Sam three times and for good measure Liam
four times.

Our only final appearance was in 1973, which was the first year we even won our province. In a competition that was 44 years old by then! Granted, we’ve added eight more since, four of those in the last eight years.

But what about under-20/21 I hear you say? Yes, we’ve won two All-Irelands at those grades, while Meath, Offaly and Westmeath have one each. We’ve won the provincial title eleven times, ahead of Meath and Offaly on eight. We’ll count that as a notch on our belts.

I’m reliably informed Kildare have played 936 league and championship games since the fun commenced in Donnybrook on 3 rd June 1888. Of those, we have won 475 and drawn 79 with 381 losses. Our win rate overall is 51% so we are a little above average. When you look at our record against other counties in competitive matches there are eleven teams who beat us more often than not.

Of course, Kerry and Dublin are the top two but Tyrone, Galway, Roscommon, Cork, Armagh, Derry, Down, Meath and Mayo are also liable to beat us more than they lose to us. With Monaghan it is 50/50.

When you consider that Kildare were among the pre-eminent counties in Ireland for the first forty-odd years of games, what all of that points to is that our normal place in the scheme of things is somewhere around 12 to 16 mark in terms of rankings. And lo and behold that’s where we appear to remain on the basis of the first two weeks of league action. Somewhere around the middle of Division Two.

We might catch a lucky break next week and sneak into the promotion play-offs (where we would be favourites against neither Mayo nor Meath). Equally, even a win might not be enough to avoid the relegation play-offs and a make-or-break encounter with Westmeath or Down. Neither of which we
would approach with any great degree of comfort.

Jack O’Connor arrived without any of the fanfare of a modern-day Mick O’Dwyer and so far he has failed to raise much of a stir from a team that has not performed with any level of consistency since Kieran McGeeney’s 2009 to 2011 sides. Different players of course. Players bought into McGeeney’s
approach to life. A flawed genius as his spell with Armagh has proven, but one who had Kildare players thinking differently about their game. About their lives.

O’Connor, without wishing to be unkind, does not strike you as the inspiring kind, nor have I heard him express any great enthusiasm for Kildare football or the players at his disposal. He has been unlucky with the lockdowns but maybe that was an opportunity missed for Kildare management and players to address their mental weakness under pressure (particularly in Croke Park) that seems to get worse by the year. Do Kildare even utilise a sports psychologist?

Losing to Clare at home may have been a first, but it was by no means a surprise. Despite being a predominantly hurling county, the Banner are well-managed and organised by Colm Collins and have knocked on the Newbridge door a few times now, not to mention beating us in Croke Park and Ennis.
No, this wasn’t a surprise, although it was a big let-down after Thurles. On the law of averages, though, Kildare will win one game and lose the next as the records mentioned above imply. O’Connor’s record is six wins in eleven games. Head just above water. Par for the course.

Kildare seemed to be going nicely enough in the first quarter with the same defensive tenacity they showed in the middle third of the Cork game. But the water-break seemed to herald a collective switch-off and Clare got a stranglehold without really looking likely to penetrate the massed defence
too often.

Eoin Doyle was a key figure in the rear-guard action. The GAA GO commentator described him as a ‘sticky man-marker’, and you wished he had been manager during the Cian O’Neill years. Doyle helped keep Eoin Cleary at bay before his unfortunate injury, but it was a collective loosening of the
defence in the second half that Clare were good enough to capitalise on. In Cleary they had the classiest forward on the park and he made hay while the sun shone.

O’Connor’s charges failed to heed the warning of Keelan Sexton’s glaring miss and despite stretching their lead to four points they never looked comfortable once the Doyle-shaped hole opened up in the middle of the Kildare defence. Defensive nervousness had gifted Clare that Sexton chance and Mick
O’Grady, who had a fine first-half, seemed to be caught napping to allow Joe McGann inside him for their goal.

Under O’Connor, Kildare have never looked capable when chasing a game and Clare were disappointingly comfortable in holding us out when we went after the scores to pull it out of the fire late on.

We have big problems around the middle of the field where Clare dominated. The Luke Flynn/Aaron Masterson partnership may not last too much longer with third midfielder Feely the more dominant figure around that area for us but we were up against a strong duo in O’Neill and O’Connor. Why
Mark Donnellan persisted with the long kick-out was beyond me as we must have lost as many as we won when drove it out.

Discipline remains a problem. By my reckoning we racked up four yellow cards and our free concession was above the 20 mark again and was particularly marked in the second half. I don’t believe Clare picked up any cards and they gave away fewer frees.

Our attacking was patchy. Jimmy and Neil were on fire early on, but Clare soon figured that out and kept a tight enough rein on them after the water break while Darragh Kirwan had one of those days. Shane O’Sullivan was a breath of fresh air when he came on. Confident lad, you can see him starting
before long.

Again, I’d love to comment on what sounded like a fine win for the hurlers over Derry, traditionally such a tough opponent. But the Poundland streaming was done through mime once more and froze altogether when a drop of rain got into the cables. We’re a football county you see, even if we’re not.

Séamus Dillon kept us informed on KFM when the lines went dead on YouTube. Now there was fine footballer in his day, although I’m not sure he ever lifted a hurl.

p.s. Fair play to Billy Dunne (aka Ladderman) who I’m told was back on his precarious viewing perch on the terrace side on Sunday. God bless that man’s patience (and balance).

The Supporter Column appears in the Kildare Nationalist which is in your shops each Tuesday.