Top Of The Table For Kildare With Deserved Victory Over Laois

A winner-takes-all rematch with Meath beckons for Kildare in the Division Two Promotion Semi-Final after a comprehensive thirteen-point win against a profligate Laois in O’Moore Park this afternoon. 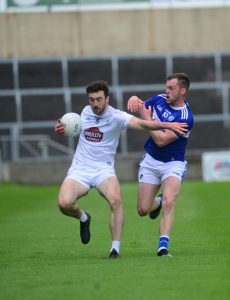 Kevin Flynn got another goal for Kildare in Portlaoise on Sunday Photo: Martin Rowe

Kildare’s margin of victory coupled with Cork’s narrow win over Clare meant that the Lilies topped the group on scoring difference with Clare in second place. Cork join Laois in battling to beat the drop.

It was by no means a perfect Kildare performance but they were clearly superior to a Laois side that have been outclassed in Division Two and face a relegation battle now after three straight defeats.

It wasn’t until Luke Flynn’s palmed goal in the 31st minute that Kildare put enough daylight between the teams to feel any way comfortable. Darragh Kirwan won the ball on the stand side and fed Kevin Feely with a clever handpass. The Athy man could have gone for goal himself but unselfishly fisted across to the far post where Flynn was on hand to apply the finish.

It came eight minutes after the Johnstownbridge man had been denied an almost identical goal when Kieran Lillis beat him to Neil Flynn’s fisted cross under the crossbar.

Neither team will be particularly happy with their shooting in the first-half with Laois particularly profligate, although Kildare had the worst miss with Brian McLoughlin marking his debut with an unfortunate close-range free edging wide. Initially signalled as a point a linesman’s intervention rightly corrected the call.

Laois were quick off the mark with the lively Evan O’Carroll pointing from play in the first minute but Neil Flynn (free) and Jimmy Hyland put Kildare ahead. By the 10th minute it was 0-4 to 0-1 thanks to superb points from Feely and McLoughlin, who had a good half despite that miss. Kildare struggled to really impose themselves and Laois stayed in touch until Flynn’s goal.

O’Carroll scored their second in the 13th minute before a trademark Jimmy Hyland mark and Fergal Conway put Kildare four ahead. Two frees from Gary Walsh narrowed the lead to two (0-6 to 0-4) before Kevin Flynn made one of numerous forays down the right wing and capped it with a fine point. His namesake wrapped up the first-half scoring with his goal to leave daylight between them.

Kildare’s win seemed secure six minutes after the break when Paul Cribbin superbly turned over possession in his own half and found Conway down the left wing. He passed to Kevin Flynn and a one-two between him and Kirwan sent Flynn through to coolly slot home past Niall Corbet, the Celbridge man’s second goal of the campaign.

If that seemed to be it, Cribbin had other ideas. A brainfreeze saw him attempt a crossfield pass from a free on the stand side to goalkeeper Mark Donnellan, who had moved into the right wing back position on the opposite side. It was a bizarre and unnecessary risk to take and Laois took full advantage when intercepting in front of an unguarded goal and Walsh drove home for a goal.

Kildare were stunned and Eoin Lowry became only the third Laois scorer with a point to make it 1-7 to 2-9. With every point vital, Kildare were teetering. Kildare, though, had the far stronger bench and from there to the finish the subs took control. Aaron Masterson hit two superb points, Shane O’Sullivan went one better with another promising cameo and Conor Hartley scored another as the Lilywhites won the remainder of the game by nine points to one.

The semi-final venue will be decided by a toss of the coin, with the winners gaining promotion to Division One for next year.