WITH the help of Naas company ITM Digital, Ireland’s top female racing Driver Nicole Drought competed in her first ever 24 Hour race at the Silverstone Grand Prix Circuit at the weekend. 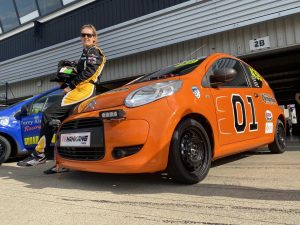 Nicole, 26, from Roscrea in Tipperary, raced a 425bhp Porsche GT4 in the Britcar Endurance Series in 2020, taking three wins on the way to second in the class championship, despite both the car and circuits being new to her. Travel restrictions have meant her race season has started late but Nicole is determined to cram in
as many races as possible before the end of the year.

Nicole was invited to join the famous Team Dynamics Motorsport squad for the Citroen C1 24 Hour Race and was delighted to accept- and to get back behind the wheel once again. The team are well known for fielding the Honda cars in the British Touring Car Championship, and were making their first foray into this 24 hour race.

Nicole and five other drivers lined up in their orange “General Lee” liveried car to take on almost 60 other teams, comprising of selection of professional and amateur drivers. Their spirits were dampened however, when the lack of testing with the newly built car meant they struggled for pace and could only qualify 50th on the grid.

Nicole discussed some set up changed with the team and, having adjusted the car, she managed to go 11th fastest in the Saturday morning warm up session- giving the whole team hope that they could move forward in the race.

As the team’s fastest driver, Nicole was elected to take the start and by the time she pitted, two hours into the race, she was running 29th, having gained an incredible 31 places. Unfortunately, that was as good as it got for the team- as a mechanical failure and some damage during the night time stints, dropped them down the order once again.

“That was really enjoyable” said Nicole afterwards, “It is an achievement to finish a 24 hour race, but the result doesn’t reflect our pace, or the effort put in by all the team. I have won races in that series before and I think if we go back, which we will, we could challenge for a top ten finish, at the least. A big thanks to Liam and the team at ITM Digital. I couldn’t do any of this without the support of partners like them!”

Nicole’s plans for her 2021 racing season will be announced in the coming weeks, with the plan being to remain in GT racing on the far side of the Irish Sea.
The Kildare connection doesn’t end there either as Nicole is managed by Leo Nulty Promotions, based in Clane.