FOR the third week in a row Kildare LGFA team Manager, Daniel Moynihan, has selected the same team for their final Lidl National League Division 3B game. The match will now be played in St Conleth’s Park, and NOT Manguard Plus Kildare GAA Centre of Excellence, as was originally advertised. The Throw-in is still 2pm. 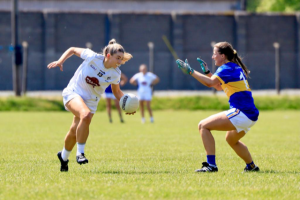 Ellen Dowling in action against Wicklow on Sunday last. The Suncroft player will be one of the keys to Kildare’s score getting next Sunday in St Conleth’s Park Photo: Karl Gormley

Not for the first time this year this is a must win game for Kildare if they are to realise their stated ambition at the start of the League campaign of reaching the knock-out stages.

At the moment Kildare are making life very difficult for themselves. They still believe that their opening game against Laois was theirs for the taking, yet they spurned the opportunity. Likewise on Sunday last in Aughrim they created enough chances, especially in the first half, to win many a game, and yet looked to be in danger until Roisin Byrne’s somewhat fortunate goal gave them the opportunity to take the lead and finish out the game.

Kildare are not playing badly, it must be said. In fact if they were to take half the chances they are creating then they would sit comfortably on top of their League Table. On Sunday they face a Longford team with a similar record as themselves with a win and a loss. They won their opening game, against Wicklow, 1-9 to 0-8, but they lost heavily on Sunday last to Laois, 3-14 to 1-9, so confidence will be dented somewhat by that result. Nevertheless  Brian Noonan and his Management Team can look to the threat that will be provided by full forward and captain, Michelle Farrell, while centre half forward, Aoife Darcy will punish and Kildare indiscretions from frees.

It was a relieved Daniel Moynihan who spoke with the Kildare Nationalist after the Wicklow victory and he is trying to figure out why his charges have not yet clicked to deliver on their undoubted talent.

Despite being known for their tight marking, the Kildare defence has conceded five goals in their two games to date. Having said that, defence begins further out the field so Moynihan will be looking for an improvement in the defensive formation for Sunday.

Midfielders Siobhan O’Sullivan and Grainne Kenneally have an enormous amount of experience between them and they are providing a great service to the forward line, a service that quite often doesn’t get the return it deserves. What an exciting forward like Kildare possesses. A time will come when that talent delivers on its potential. That will come with composure in front of goals.

This will be Kildare’s first home match of the 2021 League and the expectation is that alone will be enough to see them through on Sunday and for them reach the League knock-out stages.