Newbridge or Nowhere No More

IN this week’s Kildare Nationalist, out now, The Supporter reflects on the win over Laois in Portlaoise on Sunday last and more. We produce the column here.

PENNING an anonymous opinion column for a weekly newspaper can be an unfulfilling existence at times. So used are we to our digital interactions where one’s opinion is swallowed whole in seconds flat and spat out again with all the venom of a one-year-old tricked into a mouthful of broccoli. 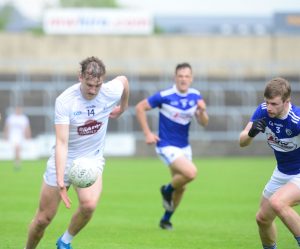 Darragh Kirwan in action against Laois in the Allianz Football League in Portlaoise on Sunday last Photo: Martin Rowe

I try in this column to reflect as best as possible the views of a variety of supporters that I interact with through one medium or another, hopefully in a constructive, respectful way. Sometimes, though, you feel like you’re whistling in the wind. I said whistling, mother.
It was nice this week, therefore, to read a note to the editor from a South Kildare reader who wasn’t a lawyer or an aggrieved club or county officer. They kindly gave permission for us to reproduce it here.

“Another incisive piece by this person this week. I read him every relevant week and I share his views on all or most things about Kildare football. There is progress in recent years at underage but again this does not transfer or translate into Senior. In the last thirty years we have had two better-than- most managers. We parted ways with Dwyer twice and of course Kieran once after six years.

A very likable ex Kildare All Star footballer told me that, in his view, there was a group there that did not wish to see Kildare win anything of significance; that group changed personnel every decade!!!

He made me think. The preachings of Dwyer and Geezer were not earth shattering but were simple fundamental things that lads embraced. Fitness, mental strength, dedication.  Interestingly I don’t believe that any of the lads who trained under those two men got the opportunity to manage or train Kildare Seniors. They would have carried the lessons learned with them. I think of Rainbow and Ryan.

The 50% tag (referring to our historical win rate) is factual and it is a place to start. Back-to- back wins is what it is about. I am 74, I hope to continue reading your stuff for a long time. Thanks. I will just say that in recent times Club Kildare have produced an enlightening missive weekly which took a bit of fresh thinking to their remit which is what is needed in all walks of life or sport.”

Always good to end on a positive note. I must remember that.

He raises a good point about learning from our two most successful managers of recent times, although Karl O’Dwyer, Christy Byrne and Bryan Murphy, to name three, have been involved with management teams (Murphy still is) and Brian Flanagan is over the under-20’s.
Why there would be a group who don’t want to see Kildare succeed, I’m not so sure, but there can certainly be a lack of imagination and energy around Kildare GAA at times that gnaws away at me.

I’d prefer not to think that is down to any warped desire to see the modern generation fail. My new friend talks of back-to-back wins being needed to break the cycle of inconsistency. We did win four in a row under Jack O’Connor before the Meath debacle but the last four games have seen us revert to type: Loss, Win, Loss, Win. Slip one purl one.

And lo and behold it is Meath on the horizon again. As much as he and Eoin Doyle played down the revenge element of the promotion play-off, if it isn’t a factor these players are not human. Nor winners. Don’t write to me on that one.

At the time of writing, I’m not sure where the Meath tie will be played. A neutral venue may have come into the equation rather than tossing for home advantage. I say advantage but as Jack O’Connor alluded to Newbridge is a very narrow pitch that doesn’t, to his mind, suit our game greatly (although his record of 3 wins and 2 losses is inconclusive on that front).

Certainly, we appear to attack better in Portlaoise and Tullamore, for example, and Navan also seems to suit an expansive kick-passing style. If Wikipedia is even in the right ballpark (pardon the pun), O’Moore Park is 86 metres wide, Páirc Táilteann 87 and O’Connor Park 90.

Croke Park is 88 metres wide, so I’m not sure what happens us there. Indeed, the second half against Meath would provide a solid counterargument to the theory. We might attack better on wider prairies but at the other end that leaves us vulnerable. The argument that Meath was a one-off does not wash.

In the previous game in Portlaoise, the King’s County had the run of the Queen’s County. They just didn’t make it count. Speaking of royalty, we can blame the British for the dimensions of St. Conleth’s, which stretches to a mere 80 metres on a good day. If they’d only had a bit of foresight when planning their parade ground, who knows how successful we might have been?

As the fella said, you can’t beat Laois often enough, and you can’t beat them by enough. That’s seven wins and a draw since we last lost to the neighbours eleven years ago, and four wins in a row on their home turf. Four of the seven wins have been by double-digit margins.
Any discussion of Sunday’s match must be tempered by the knowledge that Laois football is in a sorry mess on the evidence of the last three weekends. There is certainly no cause for suspicion that the O’Moore men broke any collective training directives.

Kildare on the other hand gave us a promising glimpse of the future. The last time Portlaoise was this hot Micko’s side trounced Offaly in the Leinster Semi Final of ’93. None of Kildare’s inside forward line were born then.

Jimmy Hyland is coming of age as a county senior this year. He is getting wily, able to win his mark, his free or simply his freedom from sticky cornerbacks. He wriggled free for a couple of sublime points on Sunday. Brian McLoughlin, his old sparring partner in 2018’s under-20 triumph, will look back on his first start with mixed feelings. A good point, a wide and a 20-metre free that will never be mentioned here again.

Shane O’Sullivan replaced his club pal in the second half and looked like a man determined not to be left out the next day. We may have raved about his talent on this page before. We’ll do so again. The most natural forward prospect in Kildare.

On the face of it, Darragh Kirwan, held scoreless in a senior jersey for the first-time, had a chastening experience. His strategy of getting the wides out of his system early didn’t work for once. But if anyone questions his contribution, I suggest you watch the tape again. Kirwan remained a focal point for the Kildare attack and he brought his goal “assists” to four in three games with his flick to set Feely away for the first and one-two with Flynn for the second.

All four of the above are 23 or under and substitute Alex Beirne is younger again. The Naas lad had struggled to make an impact in his two starts but coming off the bench he seemed to have a new burst of energy and will have enjoyed his outing. Aaron Masterson divides opinion I know and, like Beirne, he was taken out of the direct firing line by O’Connor, but came in to make a telling contribution when Feely retired at half-time.

Patience is the key with young players. You wouldn’t back him against Usain Bolt but he brings plenty to the table.

As another fella said, “Mol an óige agus tiocfaidh said”.