KILDARE Senior Hurling Manager, David Herity, has made two changes on the Kildare hurling team to face Roscommon in Round 4 of the Allianz Hurling League Division 2B in Dr Hyde Park on Sunday. Throw in 2pm. 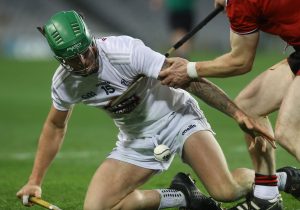 Shane Ryan and former footballer, David Slattery, who both made telling contributions when introduced as substitutes in the match against Derry two weeks ago. Ryan comes in at right half forward in place of club mate, Cathal Dowling, with another Naas man, Kevin Aherne, moving to midfield. Confey’s Slattery, meanwhile, who has now fully recovered from injury, is sited at top of the left with Maynooth’s Tadhg stepping down to the bench.

An interesting inclusion at No 26 is Celbridge’s Gerry Keegan, who dropped out of the panel for the 2017 season to travel abroad.

It’s two from two wins for Kildare in their two games to date scoring 9 -46 in the process while conceding just 1-28 in the process. Despite concession of the late goal against Derry, Paddy McKenna and the six defenders in front of him, have been miserly in the amount of scores allowed to the opposition with most scores coming from frees.

Paul Divilly has a new partner at midfield in Kevin Aherne who has been impressive with his strong running at the Donegal and Derry defences. Up front Kildare have a potent forward line that will hurt many team and have been doing so up to now with the inclusion of former footballer, Johnny Byrne, adding power and scoring ability. Slattery will now add pace to the attack.

Roscommon lost narrowly 1-13 to 1-11 to Derry in Round 1 but had no answer to Mayo last time out losing 1-20 to 1-9. Kildare and Roscommon last met in the Christy Ring Cup semi-final in Newbridge last November and after a tight start went on to win convincingly 3-24 to 1-9.

Promotion from 2B is the stated aim of David Herity and his hurling squad this year. Progress in achieving that should continue in the Hyde on Sunday.

Meanwhile the GAA has confirmed the fixture details for the 2021 Joe McDonagh Cup with Kildare hosting Carlow in St Conleth’s Park on Saturday 26 June (4pm) before travelling to Cusack Park in Mullingar to take on Westmeath on Saturday 10 July (2pm).