Kildare Move Closer To 2B Promotion

KILDARE moved a step closer to securing the National Hurling Division 2B title with a comprehensive 27-point victory over Roscommon at Dr Hyde Park this afternoon. 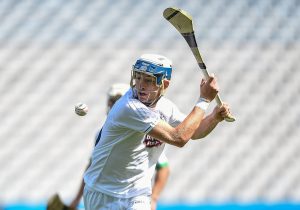 David Slattery and Jack Sheridan helped themselves to a brace of goals as David Herity’s side made it three consecutive wins for 2021.

It had been an even opening to the contest, with Kildare points from Paul Divilly (two) and James Burke being cancelled at the opposite end by Cathal Dolan, Cathal Kenny and Ben McGahon.

However, Confey’s Slattery found the net at an awkward angle in the 14th minute and never looked back from that point. In the space of just 23 minutes, the Lilywhites amassed an astonishing tally of 3-11 without reply – including additional three-pointers courtesy of Slattery and Jack Sheridan.

Returning Celbridge attacker Gerry Keegan also popped up with two points off the bench to propel the visitors into an unassailable 3-15 to 0-4 interval cushion. Despite the appearance of three half-time substitutes, Kildare continued to push forward on the resumption.

Their fourth goal inevitably arrived on 42 minutes when Sheridan drilled a 21-metre free beyond the reach of netminder Enda Lawless and a host of Roscommon defenders. While there was a slight drop-off either side of the second half water break, Sheridan, Divilly, Slattery and Brian Byrne ensured Kildare finished the contest in fine style.

Next up for the Lilies is a winner-takes-all affair against Mayo at MacHale Park, Castlebar next Saturday.