Teams from Carton House and Cill Dara Golf Clubs will compete this week as the 2020 AIG Cups and Shields come to a conclusion, with 16 teams travelling to Donegal GC to compete in four competitions. 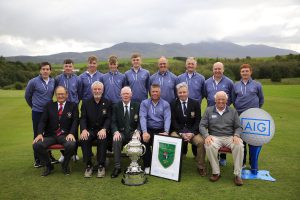 Postponed from last year due to the Covid-19 pandemic, the AIG Senior Cup, AIG Junior Cup, AIG Jimmy Bruen Shield and AIG Pierce Purcell Shield will be played for over three days on the Murvagh Peninsula.

Wednesday sees the competitions begin, with the AIG Jimmy Bruen Shield Semi-Finals. Berehaven and Ballinasloe get their matches underway at 9am, followed by Donegal and Baltinglass an hour later. All four clubs have never won the competition, so a first-time winner will be crowned on Thursday afternoon.

14 teams will be in action on Thursday, with the AIG Senior Cup, AIG Junior Cup and AIG Pierce Purcell Shield Semi-Finals taking place, along with the AIG Jimmy Bruen Shield Final.

Castletroy and Ballinasloe begin Thursday’s proceedings, with the first AIG Junior Cup Semi-Final. Ballinasloe are the only club to be represented in more than one competition this week. The winner of that Semi-Final will play Kilkenny or Balmoral in Friday’s Final.

In the AIG Senior Cup, a repeat of the 2019 Final remains a possibility, as reigning champions Galway and runners-up Carton House play Belvoir Park and Faithlegg in their respective Semi-Finals.

2003 champions Gort play two-time winners Spanish Point in the opening AIG Pierce Purcell Shield Semi-Final on Thursday afternoon. The winners of that match will play either Dunmurry or Cill Dara.

The four national champions will be known by Friday afternoon, with three of the four deciders beginning that morning.