THE 2021 Suirway Group Rallysprint Championship will kick off in just a few weeks time at Mondello Park. The series attracted strong interest in 2020 from rally crews and teams, but unfortunately, like many other forms of Motorsport, fell foul to Covid restrictions. With the restrictions now beginning to ease, the circuit has reopened its gates for business and competition will start with a race meeting on 12/13 June.  Just a week later, the rally crews will get their chance to compete at the venue. 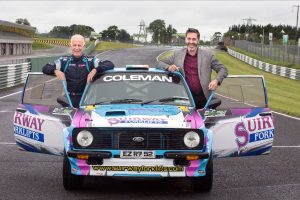 Motorsport is currently limited to gated venues and so these events give rally crews the opportunity to dust off their machines, and have some fun. The crews will tackle Mondello Park’s 7km stage a number of times during the day, and .

Roddy Greene of Mondello Park said, “We are looking forward to finally starting the Suirway Rallysprint Championship. It is a shame that so many rallies could not run in 2020 but at Mondello Park, we feel we can offer competitors and crews a safe environment to get out and compete- something they have not been able to do for some time.”

Last time round, a number of well known rallying names had intended to compete- with Rob Barrable and Cathan McCourt both having entered in R5 cars. Others who had entered in 2020 included Derek McGeehan in the MINI WRC and Ray Breen in his Focus WRC.

The Rallysprint regulations cater for all rally classes, including a Junior class, with a number of newcomers intending to make their motorsport debuts at the opening round. The first round of the series takes place at Mondello Park on 20 June and entries, priced at  €210, are now open on mondellopark.ie.

superbikes.ie Partner with the Dunlop Masters Superbike Championship for 2021