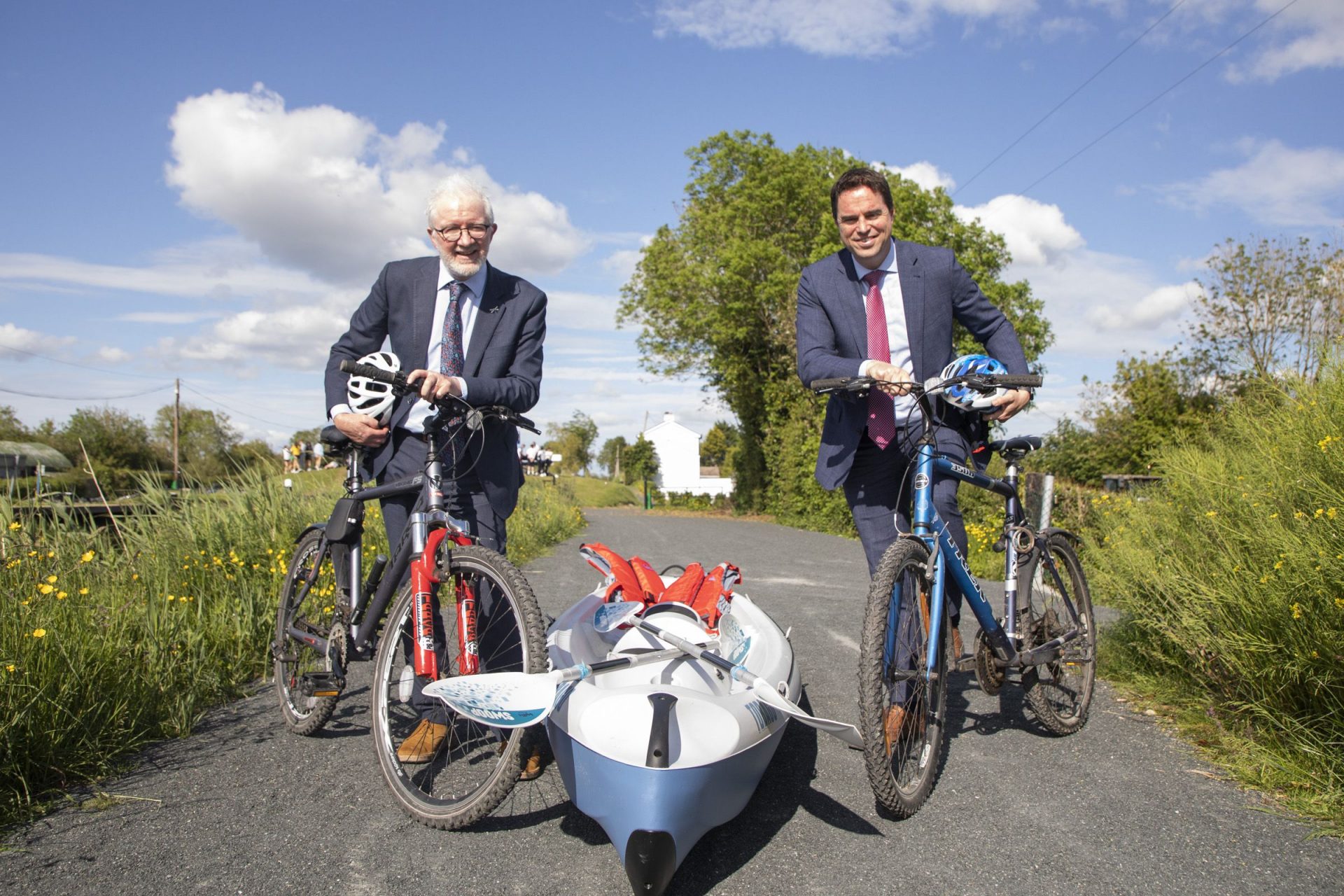 Minister of State and Kildare South Fine Gael TD Martin Heydon has called for planning permission for the Southern section of the Barrow Blueway to be re-visited. Raising the issue with Heritage Minister Malcolm Noonan and CEO of Waterways Ireland John McDonagh on a visit to view progress on the Barrow Blueway in Kildare recently he said: “I am delighted that Minister Noonan was able to accept my invitation to visit the Barrow Blueway site here at the 20th lock at Ballyteague and view a section of the Blueway in Kildare that is nearly completed.  It is great to see the progress that has been made on the 46km track so far which gives us a real glimpse of what the final Blueway will look like.  All the more reason that we should again review the final section of the original 115km route from Athy to St. Mullins in Carlow with a view to applying for planning permission again.

“I have been a strong supporter of this project since the idea of developing a Blueway through the counties of Kildare, Laois, and Carlow was first mooted. The progression of this project will be a game-changer in terms of attracting visitors to the areas of Robertstown, Rathangan, Monasterevin, Vicarstown, Athy and surrounding areas in Laois and Kildare with the resultant knock-on economic benefits for these mainly rural-based areas. Construction is progressing well and the project is on track to be completed in Spring 2022.

“This project has had some challenges but I worked with my colleague, former Minister Michael Ring to ensure we secured funding of €5m from the Rural Regeneration & Development Fund in November 2019.  When planning permission for the Tow path of the River Barrow itself mainly situated in Co. Carlow was not granted I fought to ensure that Waterways Ireland proceeded with the 46km section of the Barrow line of the Grand Canal situated in Kildare and Laois which had been granted planning permission.

“Seeing the progress that has been made here and the potential for the surrounding areas in terms of economic and tourism activities makes that all the more worthwhile and again highlights the additional benefits that could accrue for areas of Carlow and Kildare if the blueway could be extended to St. Mullins in Carlow along the tow path of the river.

“I would like to commend Waterways Ireland, Kildare and Laois County Councils for their work to date on this project and assure them that the communities and residents of Robertstown, Rathangan, Monasterevin, Vicarstown, Athy and surrounding areas in Laois and Kildare are greatly looking forward to using the finished product.  Each of these areas would all benefit from an even more ambitious and extended Blueway than the current 46k, route that is already so eagerly awaited.”