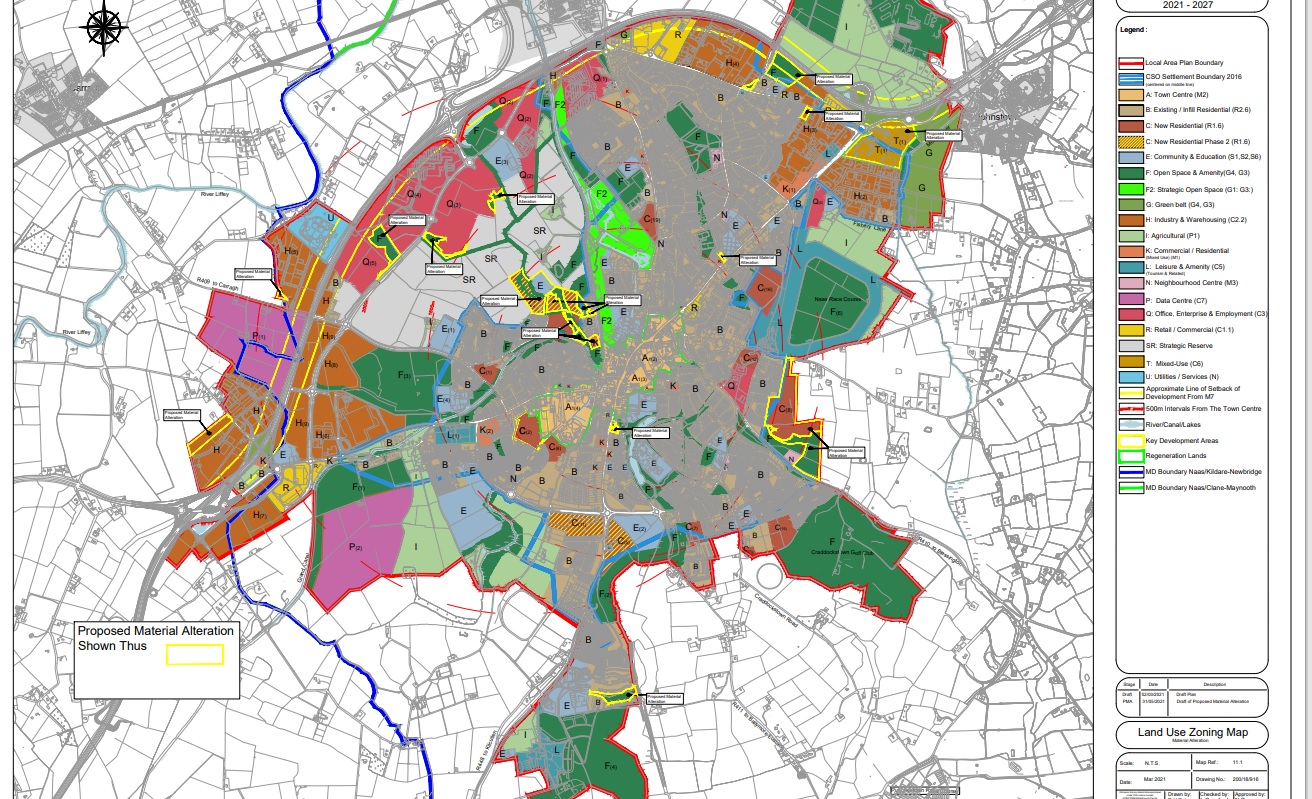 A STAGGERING 883 submissions have been received by Kildare Co Council in relation to the draft Local Area Plan (LAP) for Naas 2021-27 which was finally released for public consultation at the end of March after a two-year delay.

The council’s Chief Executive Peter Carey is now in the process of reviewing the 669 pages of submissions on the 193-page LAP before putting his final recommendations before the elected members in July, when they will have the summer to evaluate and return in the autumn with their suggested changes.

However, the biggest change in the eventual publication of the final LAP will be that the decision will go before all 40 Kildare councillors, rather than the seven from Naas, as part of the plan encroaches into the Kildare-Newbridge Municipal District.

This is a ruling that could have a large bearing on the future of the controversial Naas Inner Relief Road (NIRR), which was voted down 6-1 by Naas councillors almost two years ago, but still kept in the draft LAP.

After being discussed for nearly 30 years, the prospect of the NIRR was finally given some legs in 2017 when the Government introduced the Local Infrastructural Housing Activation Fund (LIHAF), an emergency source of €226m for 34 projects across 15 local authorities deemed crucial for the development of additional housing.

In Naas this new road was deemed necessary to facilitate the 800 new houses planned for the Blessington Road. However in June 2019 only one councillor – Fine Gael’s Fintan Brett – voted along with the recommendations of the council’s Roads Department.

“The inner relief road had a very specific job – it wasn’t a bypass- it was to take traffic from the town centre, and to facilitate further housing development on the eastern side of Naas [ie. 800 homes in Craddockstown],” said Cllr Brett then.

“We could lose up to €6.5m in [development] levies if Phase 2 and 3 of this doesn’t get permission,” he predicted.

An estimated €400,000 had already been spent by the council in planning this road, and selecting an optimum route. However it has been long-fingered in the interim.

Cllr Bill Clear has predicted that a decision on the final LAP might stretch to next year. The corresponding Plan in Athy had a total of 75 changes to thrash out amongst just five councillors.

“We’re expecting a lot of these changes to arise, although they’re quite restrictive on zoning issues,” he said of the statutory constraints restricting councillors these days.

He asked citizens to be patient and bear with their local representatives as the County Development Plan (CDP) is being considered at the same time. “And there’s 1,500 bloody pages in that,” said Cllr Clear.

“There’s the CDP, the LAP, the Naas-Sallins Traffic Strategy, the Open Spaces Strategy, the Speed Limit Review…” he said, listing the outstanding reports still before the councillors for discussion and decision.

“It never ends. It’s document to document, and we’ve had to review all these [LAP] submissions, but we do our best,” said Cllr Clear.

“There’s all these decisions still to make, but we’re not professional planners, and this is an art,” he said of the process.

The reason the Naas LAP is two years behind schedule – originally it was for 2019 to 2024 – was because the State’s independent Planning Regulator Peter Cussen expressed concern that the first draft “is continuing and intensifying the trend of the development of a peripheral arc alongside the motorway” – what one councillor described as “doughnut development”.

Mr Cussen found there had been “a sustained shift towards the M7 motorway in recent decades” in terms of town development, which had increased car dependency among local residents, and he believed such a shift had been followed by the rapid development of low-to-medium density housing which had resulted in “a weak town centre”.

Whether all this has been addressed to his satisfaction we will discover before the end of the year, as his office will again get final say.