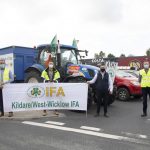 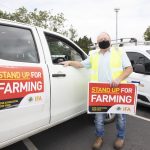 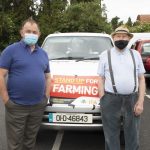 . Denis Halpin from Hollywood and Joe Fitzpatrick from Monasterevin 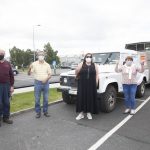 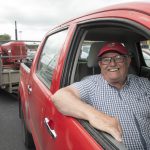 Michael O’Brien from Athy leads the march at the Kildare Parade in Naas. 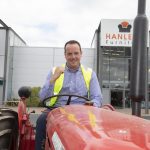 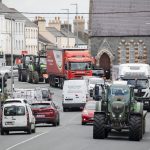 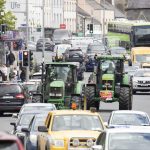 Tractors on the streets of Naas 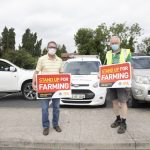 Pat Farrell and Liam Dunne from Athy at the Kildare Parade in Naas.

Kildare farmers joined the IFA national ‘Day of Action’ driving tractors through the streets of Naas this morning to warn against the dangers in the current CAP proposals and the Climate Action Bill.

It was the first large scale demonstration by IFA since the pandemic.

“Irish farmers are committed to climate action, but policies and targets are being pursued at EU and national level without any assessment of the economic and social impact they will have on farmers and rural Ireland,”said IFA President Tim Cullinan.

“The farming and food sector employs 300,000 people across the country and contributed €13bn in exports in 2020. Outside of Dublin and the mid-east region, the sector provides between 10% and 14% of employment. This is being forgotten in a rush to sterilise Irish farming”.

“Last week, I met the Taoiseach Michael Martin, Minister Eamon Ryan and Minister Charlie McConalogue. I warned them that unless there is a change in the current direction of the CAP and changes to the flawed Climate Action Bill, farming in Ireland, as we know it, will cease to exist.”

“A cohort of productive farmers are being hit with huge cuts under the CAP. The EU wants farmers to do more environmental actions, but they won’t fund it. To deflect from this, they have come up with proposals designed to divide farmers,” he said.

“The Irish Government have to secure the maximum flexibility under the CAP and fully honour their Programme for Government commitments to co-finance the CAP and allocate €1.5bn from the Carbon Tax to fund environmental measures,” he said.

“In addition, the flawed Climate Bill contains anomalies which are likely to increase global warming rather than reduce it,” he said.

Tim Cullinan said farms remove carbon from the atmosphere, but this is not recognised in the definition of carbon budgets in the proposed Climate Bill.

“The Bill’s overall goal is to be climate-neutral by 2050 on a ‘net carbon’ basis. However, the proposed definition of carbon budgets in the Bill only refers to emissions and not removals. As it is currently drafted, it will also result in ‘carbon leakage’.  Less food will be produced in Ireland, with more being produced in countries with a higher carbon footprint, which will increase global warming. It’s environmental showmanship with no regard for the real impact of the measures on actual global warming,” he said

“The Programme for Government and the Climate Bill refers to taking account of ‘the distinct characteristics’ of biogenic methane in setting climate budgets. Yet it appears that the Government now want to walk away from this commitment,” he said.

“We have tried to engage constructively with the Government and Minister Ryan, but he says the Government won’t take amendments. It’s complete nonsense, and it’s time that rural TDs from Government parties stood up for Ireland’s largest indigenous sector,” he said.

“Farmers want to do more on climate action, but current farming environmental schemes are completely over-subscribed. Furthermore, a comprehensive renewables strategy, which incorporates the agricultural sector, is non-existent. Currently, there is no option for farmers interested in micro-generation to feed into the national grid. The forestry licensing system is in complete disarray.  Supports for those considering a switch to organic production is inadequate, to say the least.”

“We want to work with Government on climate action, but there has to be real engagement. Setting targets without any regard for the consequences and any supports won’t work,” he said.