IT’S Division One football in 2022 for Kildare after a thoroughly deserved three-point win over
old rivals Meath at St. Conleth’s Park. The spirit was strong and when the spirit is strong
there’s plenty of ability to back it up in Kildare. 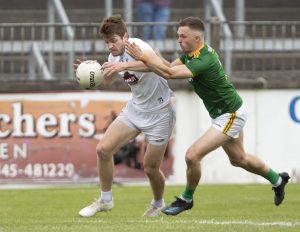 Kevin Feely on the attack for Kildare in the victory over Meath at St Conleth’s Park Photo: Sean Brilly

A dominant first 50 minutes saw Kildare build up an eight point lead before the sending off of
Luke Flynn gave a lacklustre Meath the impetus to launch a typical comeback but the Lilies
had enough in the bank to hold firm.

Anything other than a home win would have been a travesty but Kildare were grateful for a
late, late save from Mark Donnellan from Darragh Campion after the Royals had shot eight
of the game’s last nine points to bring them within a score of forcing extra-time.

Kildare looked determined from the off to make amends for the Leinster Semi Final defeat to
the Royals and within five minutes Jimmy Hyland had goaled to put them four points ahead,
the Ballyteague man taking advantage of a fine ball in from Neil Flynn to slot past Andy
Colgan from point blank range.

Hyland’s involvement was short-lived, however, as two minutes later a hamstring strain
forced him from the play and must cast doubt over his availability for the championship. It
wasn’t long before Paul Cribbin had to be stretchered off with what looked like a serious
ankle injury.

Brian McLoughlin replaced Hyland and he made a big impact in the first half while Kildare
held Meath in a vice-like grip at the other end. Clane’s McLoughlin sored three fine points
with Cribbin’s replacement Alex Beirne also on target as Kildare went in at half-time six
points ahead (1-7 to 0-4).

Of course, the Lilies held a six-point lead at the interval in Croke Park in December as well,
but they continued to dominate the third quarter on this occasion. McLoughlin and Kevin
Feely exchanged points with Meath’s Ethan Devine and Cillian O’Sullivan but Feely tweaked
his hamstring in kicking that point and off he went too.

Despite that setback, Darragh Kirwan and Neil Flynn scored fine points from play before
Luke Flynn’s dismissal for an off-the-ball incident but there was no immediate impact of
going down to 14 men as Kirwan took a pass from substitute Shane O’Sullivan to push
Kildare nine points ahead (1-12 to 0-6) at the second sos uisce.
Nine became ten with McLoughlin’s 54 th minute free but with the heat in the mid-twenties and
the sun beating down, it was increasingly difficult for Kildare to keep up their incredible work
rate.

Meath would gradually whittle down the lead with Shea Ryan’s fisted point ending Kildare’s
scoring on 59 minutes. Eamon Wallace, Mickey Newman, Cathal Hickey, Joey Wallace and
Jordan Morris brought Meath to within five points of the winners heading into injury time
before an off-the-ball shemozzle lead to two red cards and two yellows for Meath and just
the one yellow for Beirne for the Lilies.

There was 74 minutes on the clock at that stage but nerves began to jangle when Newman
slotted over a free and when Morris repeated the dose on 77 minutes, there was only a goal
between them.

In one last attack Meath looked set to equalise but Donnellan was out quickly to block
Campion’s ground shot and reacted quickly enough to gather the ball in the small square.
Barry Cassidy’s long whistle sounded and the revenge mission was complete, with Kildare’s
exciting blend of youth and experience heading to the top flight of the league after two years
in the second tier.

In the meantime, Jack O’Connor will need to survey the walking wounded in the three-week
break before a Leinster quarter final with Offaly and Louth, both also promoted this weekend.
With Daniel Flynn unable to line out with a new hamstring injury, Hyland and Feely suffering
with the same curse and Cribbin heading to hospital on Sunday night (not to mention
impending suspension for Luke Flynn), it will be interesting to see which fifteen line up for
that one.