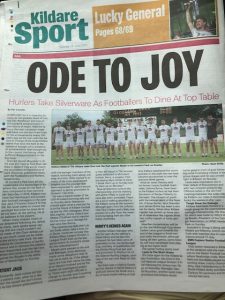 More silverware for Kildare hurlers: Reports/Pic/Reaction from Kildare’s promotion to Division 2A

Club Scene: Reports/Pics from some of the weekend’s main League and Championship matches

LGFA: Reports/Pics on Kildare’s League semi-final victory over Sligo which sets up a League Final with Laois

Soccer: Updates from Klub Kildare on preparations for the start of the SSE Airtricity National Underage League

Racing: Report on Kildare’s Trainers/Jockey’s/Owners including a first win in 14 years for Rathangan trainer, Dermot Murphy

…..and much more in this week’s Kildare Nationalist out now.