RATHCOFFEY booked their place in the last four of the 2020 Tom Cross Transport Junior Football Championship with a pretty straightforward victory over Castlemitchell on Wednesday evening. The men in blue and white took the lead with a point from the boot of Shaun Flynn in the third minute and they stayed in front for the remainder of the game. 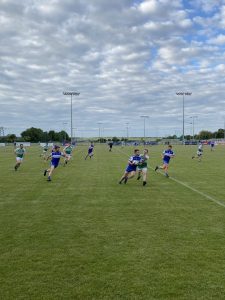 Further points from Flynn and Jason Acton helped Rathcoffey race into an early 0-5 to no score advantage before Castlemitchell eventually registered their first score of the game as corner forward Paddy Ryan slotted over a free kick, from distance. The two sides exchanged further points after the first half water break before Castlemitchell hit a small purple patch and Ryan netted the game’s opening goal, calmly slotting the ball under the onrushing body of opposition goalkeeper, Stephen Hayden.

That was to be the last score of the first period for Castlemitchell however, and Conor Harris and Jason Acton points ensured a healthy advantage for Rathcoffey at the interval on a scoreline of 0-11 to 1-2.

In truth, the second half petered out as a contest, with Rathcoffey outscoring their opponents by 1-5 to 0-3 approaching the last 10 minutes of play, with Conor Harris getting his side’s first goal. That was soon followed up by a second, this time from the penalty spot, Jason Acton sending the goalkeeper the wrong way to put some gloss on the scoreboard in Manguard Plus Kildare GAA Centre of Excellence, Hawkfield.

There was still time for Castlemitchell to convert a penalty of their own as Cody Mulhall, an accomplished soccer player, buried the ball low and hard into the bottom corner following a foul on Emmet Hyland inside the square. Rathcoffey finished the game the stronger and tagged on further points courtesy of Cathal Travers and Cormac O’Sullivan before the full-time whistle and were full value for their 13 point victory.

In the other Tom Cross Transport Quarter Final played at St Conleth’s Park on Wednesday evening, Kill defeated Athgarvan 1-10 to 1-8.