On the trail of three Kildare mysteries 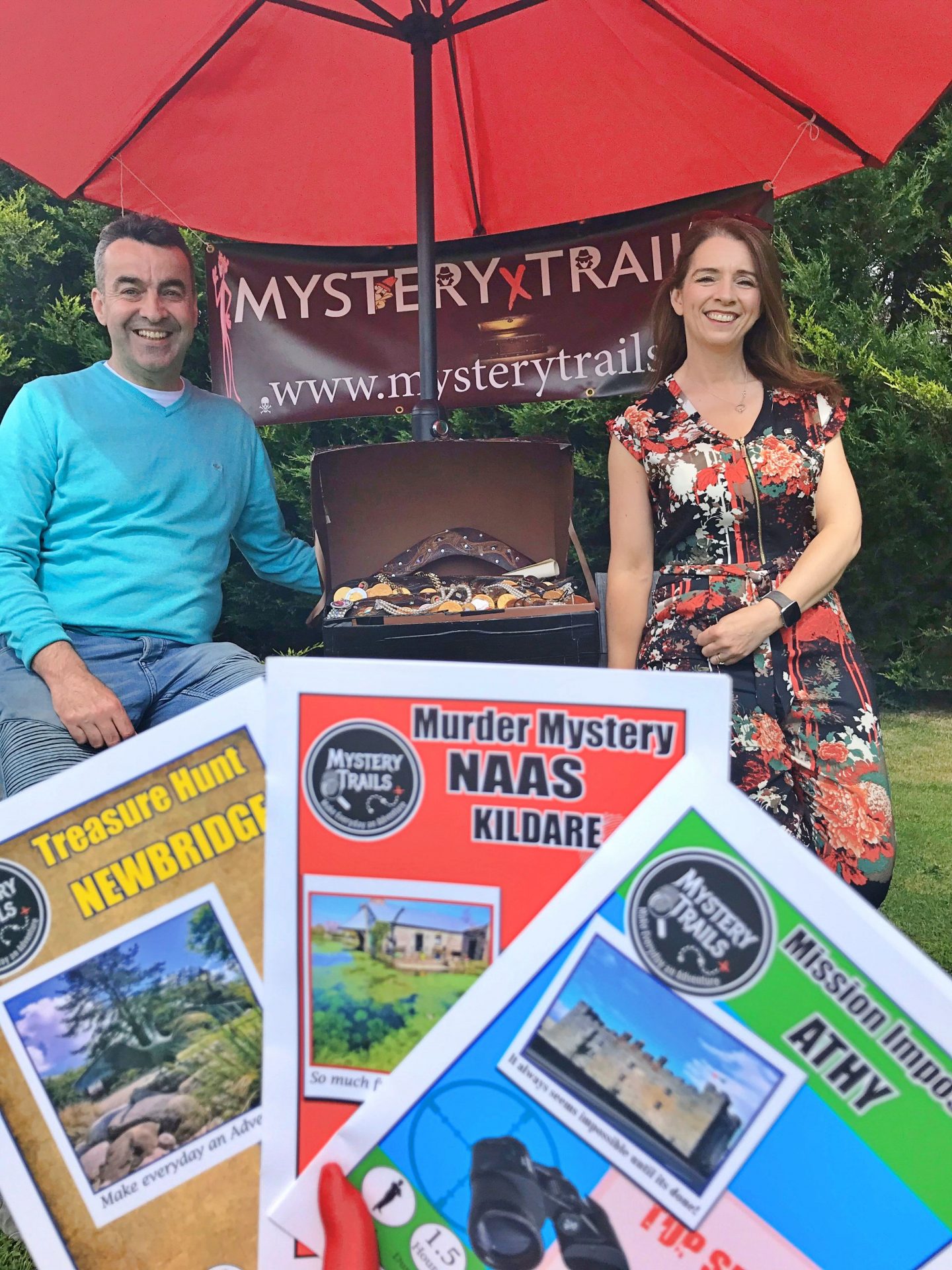 A HEIST at the Newbridge Silver Museum, a murder in Naas, and a dastardly plot to flood Athy are all linked. Or maybe not, depending on how you look at it. The link is that they are all stories written in the ********Mystery Trails******** series created by a Cavan-based couple whose mission is to get people to walk around every town and village in Ireland and find out stuff.
To date there are some 60 such ******Mystery Trails****** in the series across the 26 counties, and more are coming. They are available for download from mysterytrails.ie as sets of ‘clues’ for each location, designed to bring visitors through the chosen town, finding its highlights, and in the end solving the ‘mystery’.
“It’s a great way for visitors, especially families, to have a day out in a new place,” says Mystery Trails founder Pat Gillick, who, with his wife Karen, has been travelling the country to develop the series. “Each of our trails costs just €9.99 and with that everyone can have a healthy day in the open, solving a mystery, and enjoying themselves away from screens and technology.”
The idea took shape following a work accident some six years ago which left Pat immobilised for a period of six months. After 20 years in his job, he had to re-evaluate what he was doing and where he was going. The background to Mystery Trails was already well established as, while fundraising for the local soccer club, he and Karen had been the organisers of many treasure hunts and murder mystery weekends.
“I’m really a man who never grew up,” Pat says. “I loved organising the hunts and the weekends, and writing up the scripts for the mystery weekends, so when I had the accident and had to re-think the future, I found the time to make *******Mystery Trails***** happen.”
For his initial set of locales, Pat Googled the top 20 tourist locations in Ireland, from which he chose his early trails. He gives absolute credit to local history and Tidy Towns groups, town councils, and other agencies for the trail directions and stops. “In every town these groups have usually gone to a lot of trouble to mark and establish local places of interest. The thing is, many people even living in those towns never get to know about them. I remember on one occasion early in the morning photographing a plaque, and a local man came along and told me that he had never read what it said.”
The idea of writing a mystery story around the locations was to make it a fun event rather than a history lesson. There are three basic themes — Treasure Hunt, Murder Mystery, and Mission Impossible. “I established those themes while doing the mystery weekends, and they work well for Mystery Trails too. Each story is individual to the town, and devised so that it can be enjoyed equally whether a six-year-old or someone who is 106. The mysteries and murders are more *********Miss Marple******* or *******Murder She Wrote****** than ******CSI*******, so are easy to take.”
Simplicity is key to the whole concept of Mystery Trails. From the website, a pdf of the chosen Trail can be downloaded after payment of the fee. There are full instructions, maps, and clues to follow. If you get stuck, or want to show that you have solved the mystery, there’s a free text element. Other than that there’s no technology involved. “It’s back to old pen and paper, really.” Each Trail is also available by post as a full colour printed booklet, and a number of bookshops in Dublin, Cavan and Meath also stock them.
Prior to Covid, Pat and Karen were researching two new trails a week, and plan to restart that level of activity again soon. The aim is to eventually have a trail for every town and significant village in Ireland.
Mystery Trails has grown as very much a family affair, with Pat and Karen’s children also involved. “One of our three daughters is an English teacher, so she proof-reads and fixes my spellings. Another daughter’s boyfriend trained me up in Adobe InDesign so I could make up the booklets. And Karen does all the marketing.” And the reviews coming in from customers are all very positive. It’s a small but growing business that Pat says he still has to pinch himself about from time to time. “I’m doing something I love doing, and I’m working on ways of getting people to pay me for it. That’s the traditional dream for everyone, isn’t it? And I get to travel the country with my wife while doing it.”
A dream developed while immobilised for six months, six years ago, has become real. The mystery of whether it could be done, solved.