Pride In The Lilywhites – The Supporter

It was a happy Supporter who reflected on three wins for Kildare county teams, the footballers, the hurlers and the ladies footballers, in this week’s Kildare Nationalist. Now we know what it takes to keep our Supporter happy. Have a read below!

DRINK that one in! A weekend to be savoured and no doubt a few Kildare publicans were the immediate beneficiaries of a Lilywhite treble.
All we ever wanted was a bit of pride in the jersey, a willingness to put bodies on the line and a never- say-die attitude. We got that in spades from all of our teams at the weekend and with two promotions for the men and a final to come for the ladies footballers it was something of a white letter day for the games in the county. 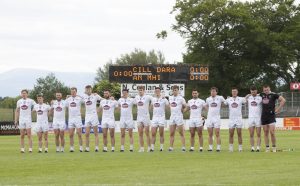 The subsequent performance from the footballers 24 hours later will take away some of the glory from David Herity’s hurlers but they too have been accused of being soft in the past and Saturday in Castlebar looked as if it was turning into the mother of all let-downs.

I honestly couldn’t see past a Kildare victory beforehand, such was the panache with which we have played all through the league, but my resolve was withering as Mayo pushed almost out of sight in the first half. Yes, Mayo had a stiffish breeze favouring them but Kildare were gasping for air it seemed.

Goals can turn hurling games quickly, however, and David Slattery is the new-found goal machine of the small-ball game, already equalling his three-goal haul from 33 appearances with the big ballers and he only a wet week with the hurlers. Slattery’s goal before half-time made it a very different team talk for Herity you’d imagine and how good was it to see a Kildare team emerge with such determination to seize a game by the jugular?

Since James Burke’s tour-de-force in the 2018 Christy Ring final, a couple of months after recovering from serious illness, we’ve been waiting for him, perhaps unfairly, to produce the same level of sustained brilliance. But cometh the hour cometh the Naas man on Saturday, his scoring streak doing so much to break Mayo resistance in tandem with clubmate Jack Sheridan’s stellar performance.

Playing regular Division 2A and, ultimately, we hope, Division 1 hurling is the only way for Kildare to leverage the tremendous work done at development level and by Herity and his predecessors in recent years. There’s little rest ahead of them now, of course, with two huge games to come in the McDonagh Cup.

The Ladies footballers found their scoring touch when the chips were down in their semi-final and Daniel Moynihan’s charges can approach their final with some confidence. A bit like the men, being in Division 3 will not help their development and hopefully they are upward bound as well.

A return for a handful of us supporters to St. Conleth’s Park on Sunday brought something of a “Newbridge or Nowhere” feel to the old place. Maybe it was the sweltering heat. The old place was still shabbily chic. The Joe Mallon Motors hoarding still re-assuringly askew and the scientific experiment in the jacks heading surely for Nobel Prize territory. It’s said even COVID took one look inside that place and decided to, er, tie a knot in it.

The “Please Stand for the National Anthem” entreaty was a bit too quick off the draw for the dusty old gramophone up in the Eagle’s Nest. We would have had time for another Johnny Doyle monologue to fill the gap but eventually the needle found the vinyl and we were off.

The scenes on the pitch soon resembled an episode of M*A*S*H with Dr. Phil doing his best impression of Hawkeye. I’m sure I heard choppers circling and Emmet McDonnell shouting “incoming!” in his best impersonation of Radar. Or maybe that was just Jack’s ride home landing.

Seriously, though, such a shame for Jimmy Hyland to suffer the confounded curse of the hamstring again, the poor lad’s face confirming without any need for Dr. Phil’s second opinion that the body’s weakest link had failed in its duty once more. I saw during the week that David Whyte has produced a new top that provides extra protection and grip to the forearm. If he could find a protective wrap for the hammer, he could make himself a small fortune. Send two up to Johnstownbridge for Daniel.

All flippancy aside, Paul Cribbin’s injury looked a bad one. You can always tell when a player is motionless for so long, gripped in pain.
Clubmate Luke Flynn’s rashness saw him see red and, with Feely hamstrung as well, Kildare had suffered four massive blows. It was as if the man above was taking pity on a listless Royal effort.

Kildare had bossed the first three-quarters of the game and there were so many positives to report. Chief among them was the controlled defensive aggression, epitomised by Eoin Doyle and Mark Dempsey. Thou shalt not pass and we shall not grant you easy frees was the clear motto. Ryan Houlihan was quietly effective too and is settling back into the swing of things after five years away.

The performance had a touch of beauty and the beast about it. If the defence was curmudgeonly, and the response to adversity as reassuring as it was unfamiliar, the youthful attack provided the romance and panache. Hyland had already delivered what turned out to be the match-winning goal before stepping aside for his erstwhile under-20’s partner in crime Brian McLoughlin.

“Maccie” has talent to burn, deceptively so at times. Older readers will remember Chris Waddle shuffling down the wing with a distinctive hunched style, seemingly without a care in the world and in no particular hurry to get anywhere in particular. McLoughlin has a similar air but he has a left foot that would spread butter evenly into all four corners, his free from that tight angle on the right laughing in the face of the one he missed in front of the Portlaoise posts.

Of course, Kildare being Kildare, it’s never as easy as it could be. Who among you didn’t fear the worst when a belatedly stirred Meath side whittled the gap down to a single score? We’ve seen that movie and all of its sequels but this didn’t seem like a collapse as there were rational explanations: the heat, the heavy schedule and the level of experience that had been forced into the recuperation tent.

In adversity heroes emerge. Donnellan, Doyle, and O’Grady you’d expect to lead the way but as the temperatures soared so too did Aaron Masterson. The Moorefield lad doesn’t always convince the watching faithful but he was a man on a mission all afternoon having been thrust into midfield when Daniel pinged his “good” hamstring during the week. Thankfully, there were no choppers in his flightpath as he launched himself skywards to offer Donnellan an easy target time and again.

Division One has a scary look about it and we mustn’t forget we lost at home to Clare along the way to promotion. Jack has the look of a lucky manager right now, though, and you would imagine the lure of top-flight football, not to mention a joust with his Kingdom, would encourage him to seek a third term.

If that doesn’t transpire – and with Kildare you’re always one game away from an ignominious defeat (Offaly and Louth are flying too) – Davy Burke did his credentials no harm whatsoever in lowering Cavan’s colours with a smash-and-grab raid on Saturday. Keeping Wicklow in Division 3 is a huge achievement. He’ll be delighted to see some of his former charges making their mark with Kildare too.

Speaking of managers, one suspects Andy McEntee’s post-match frustrations had their foundations in the pressure he will no doubt be under now in the Royal County. They were seriously undercooked.

The alleged incident at the end is abhorrent at the best of times but during a pandemic such accusations should not be made lightly. If it happened, report the player. I didn’t see one way or the other but the officials’ carding of four Meath players to one from Kildare in the incident may be more telling than a beaten manager’s diversionary tactics.

In a way you’d love if a Kildare player did start the row (without an exchange of bodily fluid). We’ve been bullied enough in the past.