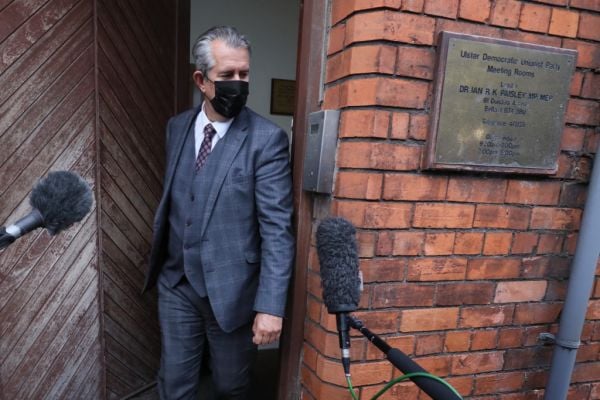 The DUP is looking for another new leader after Edwin Poots announced his intention to quit after a brief but tumultuous reign in the party’s top job.

Mr Poots’ resignation, tendered only three weeks after he was ratified in the role, came after an angry party revolt against his decision to nominate a First Minister on Thursday.

The dramatic move came after the vast majority of DUP MLAs and MPs earlier voted against Mr Poots’ decision to proceed with reconstituting the Northern Executive, amid party anger at a UK Government pledge to grant Sinn Féin a key concession on Irish language laws.

The announcement by Mr Poots, who currently remains Northern Ireland Agriculture Minister, concluded a hugely turbulent 24 hours in Northern Ireland politics – a period in which power-sharing appeared to have dodged another crisis following the nomination of First and Deputy First Ministers in a special Assembly sitting, only for the administration to be plunged back into uncertainty hours later with Mr Poots’ departure.

It is unlikely a new DUP leader would keep him in position and he could well choose to quit of his own accord before he is replaced.

A planned meeting of ministers from the Northern Ireland Executive and Irish Government will not now proceed in Armagh on Friday.

An electoral college made up of DUP MLAs and MPs will decide who will lead the party next. It remains to be seen whether it will be a contested race.

DUP leader @edwinpootsmla leaves party HQ around three and a half hours after arriving.

Declines to answer questions about his leadership. pic.twitter.com/rhGgkinyIi

Jeffrey Donaldson, who lost last month’s leadership contest by 19 votes to 17, will be seen as a clear favourite by many.

In a statement following the party officer meeting on Thursday, Mr Poots said: “I have asked the party chairman to commence an electoral process within the party to allow for a new leader of the Democratic Unionist Party to be elected.

“The party has asked me to remain in post until my successor is elected.

“This has been a difficult period for the party and the country and I have conveyed to the chairman my determination to do everything I can to ensure both unionism and Northern Ireland is able to move forward to a stronger place.”

Mr Poots was voted in as Arlene Foster’s successor on May 14th, following a revolt against the former first minister instigated by supporters of Mr Poots.

The Lagan Valley MLA was formally ratified as leader on May 27th, meaning he officially served just 21 days in the role.