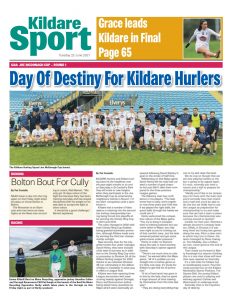 Preview of Kildare’s first game in the Joe McDonagh Cup with comments from Manager, David Herity

Preview of Kildare U20 hurlers game against Carlow with comments from Manager, Pat English

The Supporter looking forward to the championship!

Camogie: Report and Pics from U16’s match against Laois

Racing: Reports on Kildare’s trainers/jockeys/winners including wins in Ascot for Johnny Murtagh and Gary Carroll

…..and much more in your Kildare Nationalist in your shops now!