AS he looks to help the Ireland U20s continue their winning form in the Six Nations Championship at Cardiff Arms Park this evening (Friday)(kick-off 8pm), Naas RFC’s Jamie Osborne has said he has been reaping the rewards of regular exposure to senior professional rugby. 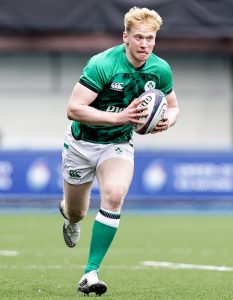 Whereas the majority of Richie Murphy’s squad had been relatively idle before last weekend’s opening round victory against Scotland in the same venue, Osborne featured six times in Leinster’s first-team during the course of the 2020/21 season. This meant he was up to speed for the return of competitive age grade international rugby after an absence of close to 16 months.

“I think the experience that I’ve got with Leinster over the last few months has been really helpful and beneficial. Hopefully I can help the other lads out and bring some of that experience into the group here. Obviously a lot of them haven’t really played too much rugby. I think they’re just all delighted to get out there and get started last week as well,” Osborne explained yesterday.

The fact that the U20s Six Nations was delayed until this time of year allowed Osborne to get an extended taste of first-team action under the tutelage of Leo Cullen in the eastern province. In his mind, the standard of play he witnessed in Cardiff last Saturday compares favourably to what he experienced with Leinster.

“The pace of the game is right up there definitely. It’s right up there almost with the PRO14. It’s pretty physical as well. I was playing full-back mainly [last week], so I probably wasn’t involved in too many of the hits like I would if I was involved in the centre [where he has been deployed by Leinster]. It looks pretty physical. There’s a few big players on the Welsh team this week. I’m sure we’ll be feeling it afterwards.”

Whilst Osborne retains his place in the starting line-up at full-back, there is considerable change amongst the Irish back line. Tim Osborne and Nathan Doak will form a whole new half-back combination, with former St Michael’s College prodigy Chris Cosgrave joining Osborne and Ulster’s Ben Moxham in the back-three.

Osborne is excited to see how the new players perform tonight in a pressurised environment and acknowledged it is important for him to create a telepathic understanding with his wing men.

“Ben Moxham is very good at communicating and he’ll tell me what he wants and stuff like that. I’ll do the same back at him. Josh [O’Connor, who played on the left-flank against Scotland] is the same. Just as long as we’re constantly communicating with each other, it just helps us function in defence.”

Still just 19 years of age (he doesn’t turn 20 until November), Osborne is the latest in a long list of players from Kildare to emerge on the provincial and international scene. Whereas most of the county’s rugby stars passed through the hallways of Newbridge College and Clongowes Wood College, Osborne is a graduate of Naas CBS.

Although current Leinster winger (and former international at this grade) Adam Byrne is also a past pupil of the latter, it remains predominantly a Gaelic football stronghold. In 2018 and 2019, they were back-to-back winners of the Leinster Colleges Senior Football Championship.

Nonetheless, significant progress is being made on the rugby front with their double success in the Fr Godfrey Cup and the Leinster Schools Division 2A Junior League just over two years ago set to be used as a springboard for further growth within their rugby programme.

Naas also made it to the quarter-finals of the Leinster Schools Junior Cup in the same season and Osborne is hopeful that more players will be able to follow in his and Byrne’s footsteps.

“I think it’s a credit to the teachers and the coaching that comes into the school and develops those players. Because it is known for its Gaelic football and they’ve done pretty well in Gaelic football recently, but hopefully we can keep bringing forward rugby in the school.”

Between his run-outs with Leinster and an impressive try-scoring performance against Scotland six days ago, 2021 has been relentlessly positive for Osborne. Still, he is expecting a stern examination from Wales on their home patch, particularly with Ospreys fly-half Sam Costelow in their ranks.

“Sam has a pretty good kicking game. He can kick to corners, he can kick cross fields. I definitely have to be on it tomorrow. Just working with the wingers and whoever else manages to end up in the back fields. We just need to be careful with him,” Osborne added.