An amazing point by Kildare wing back Paul Dolan, his second of the game, five minutes into injury time, earned Kildare a one point victory in this high scoring but hugely entertaining Leinster U20 Hurling Championship game at Netwatch Cullen Park on Tuesday evening. 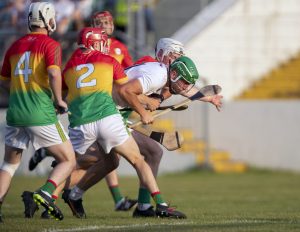 Liam Dempsey, who scored 0-13, all from frees, fights his way through the Carlow defence in the Leinster U20 Hurling Championship game at Netwatch Cullen Park on Tuesday evening. Photo: Sean Brilly

Kildare can thank freetaker, Liam Dempsey of Eire Og Corra Choill, for keeping them in the game at times but also for giving them the lead with his 13th point in the game, three minutes into injury time at the end of the game.

The sides were level four times in those pulsating last 10 minutes plus six minutes of injury time. Jake Doyle kept the Carlow score-board ticking over, both from play and frees, and Dempsey responded in kind for Kildare.

A couple of Muiris Curtin points put Kildare two up with two minutes of normal time remaining. Jake Doyle with a point from a free and one from play had the sides level for the eight time and extra time looked a distinct possibility before Moorefield’s Curtin sealed the deal for Kildare with a superb finish from near the sideline about 50 yards out.

It was an exciting and close opening half with the sides level on four occasions before Carlow went in two points up following their second goal from midfielder, Eoin Hosey, a minute into first half injury time.

Each time Carlow looked like pulling away in either half Kildare were brave in fighting back and claiming the win.

Kildare will now face Wexford in St Conleth’s Park in Round 2 on Tuesday next, 6 July at 7.30pm.