A blistering start and a tour-de-force from Naas wing-forward Fionn Maher sent Kildare to a comprehensive and hugely impressive win over Carlow in the Electric Ireland Leinster Minor Hurling Championship opening round tie at a sweltering Netwatch Cullen Park on Wednesday evening. 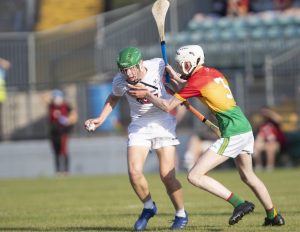 The game had none of the drama of the previous night as Kildare scored a notable underage double over their southern neighbours in the small ball game to make up for the disappointment of the senior defeat to the same opposition in the McDonagh Cup on Saturday.

A physically superior Lilywhite side took the game by the scruff of the neck from the throw in and inside ten minutes of one-way traffic they had carved out a nine-point lead with Maher responsible for half of that total. Carlow had only managed one shot from play in that time and it was the 13th minute before they opened their account from a free.

The game was as good as over when James Dolan latched onto a Ciaran Mangan handpass to race clear and fire home a goal with 20 minutes gone. By half-time Kildare led by 1-16 to 0-3 having withdrawn dual player Cian Boran and the skillful Maher had brought his total to ten points (five from play) with Carlow unable to handle the size and skill of the Kildare outfit. Niall Dolan, another dual player, had weighed in with three points from play in the opening period.

Despite a handful of Carlow points early in the second-half, Kildare kept the scoreboard ticking over and their second goal arrived on 37 minutes with substitute Killian Harrington helping it over the line after Carlow goalkeeper Eoin Coleman had spilled Alan Tobin’s dropping shot.

As both teams ran the bench man-of-the-match Maher brought his impressive tally to fifteen points (six from play), the only blot on the Kildare landscape being a 47th minute goal from Carlow substitute Eoghan Doyle who latched on to a loose ball in the penalty area after a sideline cut.

Kildare meet Laois in the next round in St. Conleth’s Park on Wednesday next week (7 July).