Kildare are through to the Leinster SFC Semi-Final after a more powerful and polished second half performance earned them a five point victory over Offaly in Portlaoise. 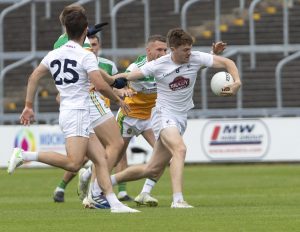 Kevin Feely on the attack for Kildare with the support of Conor Hartley in the Leinster SFC in Portlaoise Photo: Sean Brilly

The Lilywhites will now play Westmeath with Dublin and Meath in the other semi-final. Both games are to be played on 18 July.

After a poor opening first half in which both sides were guilty of poor misses, Kildare went in a point up thanks to an injury time mark by none other than fullback, Mick O’Grady.

Neil Flynn’s goal on 56 minutes steered the game Kildare’s way although by that stage of the second half the Lilywhites had outscored Offaly by 1-7 to 0-3. Maynooth man, Flynn, had a superb game contributing 1-7 from play and placed balls.

Kildare finished the game effectively with 13 men after Ryan Houlihan was sent off on a second yellow and Jimmy Hyland was missing on a Black Card for all but 30 seconds of the closing stages.

Neil Flynn’s goal gave Kildare what looked like an unassailable lead but the combination of the loss of the two players and the scoring of Offaly’s Cian Farrell, who ended with 0-8, meant a nervy ending for the Lilywhite supporters in the permitted 500 attendance. A ’45 from Neil Flynn and a point from play from Kevin Feely deep in injury time settled nerves and the game and Kildare marched on.

Kildare included Con Hartley from the start with Liam Power coming into the match day squad for Alex Beirne, who was ill according to Jack O’Connor. Offaly included Niall McNamee and Johnny Moloney from the start.