The Lilywhites and The Faithful Do Battle in Portlaoise

BY 6pm this evening one team will be in the Draw for the Semi-Final of the Leinster SFC of 2021 while it’s neighbour will be licking it’s wounds and preparing for their club championships earlier than expected. 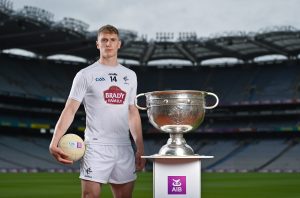 At the Draw for the Kildare Football Championships in Joe Mallon Motors on Friday evening the mood was that Kildare were looking at starting their club football championships closer to the end of August rather than the beginning of July. Hopefully that mood has permeated to Jack O’Connor and his charges in Portlaoise.

The Kerryman and his selectors were forced into two enforced changes for this game because of the suspension of Luke Flynn, following his dismissal in the game against Meath, and Paul Cribbin, following his injury in the same game.

Alex Beirne has gotten the nod over other possibles, Shane O’Sullivan and Brian McLoughlin, to fill the right half forward position while Ben McCormack, who was kept out of the League squad because of work commitments, is sited at full forward with the Management Team, probably wisely, thinking it might be too risky to include Daniel Flynn from the start.

Daniel was on media duties for the launch of the AIB All Ireland Football Championships during the week and just as he does for Kildare on the pitch he was equally adept at answering questions from the national media and yours truly on Tuesday.

Flynn confirmed that he was back in training following his latest hamstring injury which struck him on the eve of the Meath game and felt that if all went well in training then he would be available for selection for the Offaly game. He also confirmed his knowledge of many of the Offaly players from his school days in Edenderry.

The Johnstownbridgeman admitted that the team were hurt following the collapse against Meath in the championship in Croke Park last year and like many a Kildare player, and indeed supporter, yearned for the consistency in the team which would yield a string of positive results.

He was full of praise for the Kildare Management team who he said each brought their own experience and expertise to the table.

Offaly, who have decided, at least with the team announced, to leave sharp shooter, Niall McNamee, on the bench for this one, recovered well from the heavy League final defeat to Derry to push past Louth after extra time in Navan on Sunday last. Peter Cunningham has been their stand out player this year but what an option Niall McNamee is to spring off the bench.

On form Kildare should win. Of the 43 championship meetings to date Kildare have won 22 to Offaly’s 16 and there have been five draws. (Source: www.kildaregaa365.com) It’s winner takes all in this one so there will be no draw on Sunday.  As the table below shows Kildare have also had the upper hand in recent meetings including the four point win last November after Neil Flynn came on as a substitute in what was a difficult week for him and his family.

If Kildare repeat the form they showed in the Meath game last time out they will win, even if they might need McLoughlin, O’Sullivan and maybe Daniel to assist off the bench.