Colossal Win For Kildare’s Many Young Men Of 20

LEINSTER U20 HURLING CHAMPIONSHIP – ROUND 2

THEY cheered and they sang in the Kildare dressing room after the game and well they might for 13 man and managerless Kildare defeated Wexford,  one of the powerhouses of Leinster hurling, on a dreadful evening in St Conleth’s Park on Tuesday to advance to the Quarter Final of the U20 Leinster Championships where they will meet Offaly on Tuesday next. 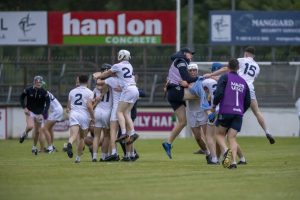 Jumping for Joy! Kildare players and mentors celebrate at the end of the Leinster U20 Hurling Championship game in St Conleth’s Park Photo: Sean Brilly

Kildare lost midfielder, Harry Dunne, to a second yellow in the 24th minute and were reduced to 13 men when full back John McKeown saw a second yellow on 63 mins after the concession of a late penalty. In between Manager, Pat English, was dismissed to the stand, also on a double yellow, in an exchange with Dublin Referee, Thomas Gleeson.

The Official is unlikely to receive Christmas Cards from either team, particularly from Lilywhite country. Some of his decisions were baffling it is fair to say.

Anyhow the Official’s performance didn’t take from the performance of the Kildare players who were outstanding to a man and looked like the “traditional” hurling county more often that their rivals.

The drama really unfolded in the six minutes of injury time added on by the Referee. With Kildare leading by three points Wexford were awarded a penalty for John McKeown’s foul for which he received his second yellow and the Slaneysiders top scorer, AJ Redmond, coolly dispatched the ball to the net to level the game for the first time since the 6th minute.

From the puck out Wexford substitute, Josh Shell, gave them the lead for the first time in the game and we thought that was it for a gallant Kildare team but just like last week they battled back to win a long range free from which, despite all the pressure, Liam Dempsey, drove the ball over the bar for his 13th point of the night.

Extra time now surely in the dark Newbridge night. Not likely with this Kildare team. They won the puck out and just like Paul Nolan’s winning point under pressure last week, Dempsey slotted the winner from out on the left on the stand side into the town goals. The 13 managerless men won the game.

Kildare raced into a 0-6 to 0-3 lead, and deservedly so, by the first half water break, with five coming from Dempsey frees and one from play by Daragh Neville. By the 25th minute Kildare midfielder had “annoyed” the Referee for his second yellow but Kildare still managed to outscore Wexford by 0-4 to 0-1 for the remainder of the half thanks to three further Dempsey pointed frees and one from play by Conor Treacy. AJ Redmond’s free was the only response from Wexford and the Lilywhites led 0-10 to 0-4 at the break.

Wexford reduced the deficit by two early in the second half through Redmond (free) and wing forward Glen Murphy Butler. Pat English was then sent to the stands after he questioned the Referee’s handling of an incident involving Wexford centre half back, Cian Molloy, which required treatment for Cathal McCabe.

Kildare were undeterred by this and they harried, hassled, blocked and tackled with ferocity and when the opportunities arose Liam Dempsey took his frees and added one from play. Even still when things did get tough goalkeeper, Sean Burke, was outstanding, particularly with his save on the hour, from which Redmond pointed the 70.

Inspirational play all round from the fifteen starters for Kildare plus the five substitutes. Motivation from the sideline and the stands too.