Two Changes On Kildare U20 Hurlers For Wexford Clash 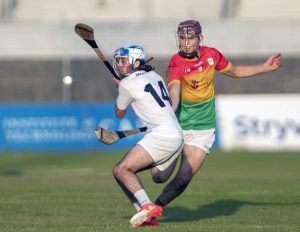 Ferran O’Sullivan (Naas) retains his position on the Kildare U20 team for the Leinster clash with Wexford Photo: Sean Brilly

Harry Dunne (Maynooth) and Conor Treacy (Celbridge), who made telling contributions when introduced in that nail-biting victory over Carlow a week ago, have been included from the start for the Wexford game. It was Treacy’s 46th minute goal, off the bench, which contributed to Kildare getting back into the game at a crucial stage.

Dunne is now at midfield alongside the impressive Conan Boran while Treacy takes up the left corner position with senior player, Cathal McCabe moving out to left half forward. The backline remains untouched.

As well as Treacy’s Paul Dolan’s point deep in injury time won the game in Netwatch Cullen Park and Liam Dempsey’s 0-13 from frees did the damage but overall it was the determination and never say die attitude of the entire team that actually won the day against Carlow.

A repeat performance on Tuesday night will surely put them in the shake up against firm favourites, Wexford, who come into the game cold.

Kildare U20 Team for Leinster Championship Round 2