ATHY booked their place in Phase 2 of the senior league with a six-point win over their old rivals Moorefield on Tuesday night in a repeat of last year’s county final. However, it didn’t look like that would be the case in the opening exchanges. 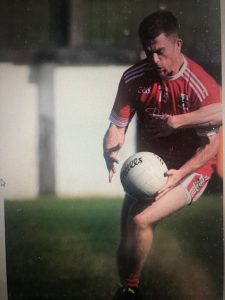 A long period of possession at the beginning of the game for the home team combined with fine scores from Ryan Moore and Adam Tyrell gave Moorefield an early lead.
It wasn’t until Athy’s Cathal McCarron pointed in the 12th minute that they would register a score. After the water break, the game really took on a championship pace. Tackles were flying in at a breakneck speed. It looked like Moorefield’s number 15 Eoin Meehan had given his team a half time lead with a beautiful free from the sideline, however late points from Niall Kelly and Liam McGovern sent the visitors in leading 6-5 at the break.

Even with their leading scorer from the league, James Eaton, having to go off with an injury in the first half, Athy’s forwards began to take control after half time. Points from Ben Purcell, Tony Gibbons, Paschal Connell, and further efforts from the superb Kelly enhanced the lead.

Athy’s breakthrough came in the 47th minute, when a long kick out from James Roycroft landed in the hands of Connell. Connell played in substitute Hugh Mahon with a handpass, who in turn found Gibbons in the square.  Athy’s number 15 had it all to do in a crowded area, but with a quick turn and smart finish, found the goal Athy craved to finish the game