THAT was the week that was! Fresh from the outstanding exploits of the U20 hurlers on Tuesday evening Kildare’s minor hurlers added to the excitement by scoring a seven point victory on Wednesday evening over a Laois side that included former Waterford Manager, Derek McGrath, as part of their backroom team. 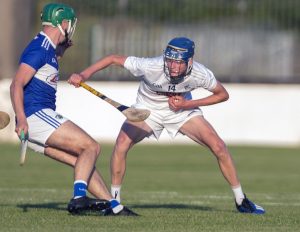 Fionn Maher (Naas) who made an outstanding contribution of nine points in the Leinster MHC Round 2 game at St Conleth’s Park Photo: Sean Brilly

The sides were level on only one occasion in the game, that was after Fionn Maher opened the scoring for Kildare with a free and Laois full forward, Colin Byrne equalised from play inside the first three minutes. Right from Eoin Sheehan’s long puck out, Kildare corner forward, James Dolan, won possession outside the 21 yard line and raced through to score his own and his side’s first goal. Kildare were never headed after this, in fact the closest the O’Moore county got in the game was two points.

Kildare finished the half with 1-3 without reply with the points coming from Niall Dolan, Alan Tobin and Fionn Maher and the opportunist goal coming from a James Dolan kick to the net after Laois had failed to clear the danger to leave the hosts leading 2-8 to 0-6 at the  break with Laois surely ruing the nine wides they recorded in the half.

The O’Moore county turned around with the wind and sun in their backs and looked like they meant business as they trotted off three points without reply through Brian Duggan, half time substitute, Jack Breen and Colin Byrne, his fourth at that stage. Kildare rose to the challenge again and Maher with his fourth, a free, Seamus Kelleher and Niall Dolan pushed them back to seven points in front at the second half water break.

Each time that Laois looked like they would eat into the Kildare lead in the final quarter through the likes of midfielder, Eoghan Cuddy, Kildare responded with the impressive Maher who ended up with 9 points from play, frees and a sideline cut.

Kildare will now face Wexford in the Quarter Final on Wednesday evening next.