Divilly Returns And Johnny Byrne Listed To Start Against Westmeath

KILDARE senior hurlers received a major boost in advance of their crucial Joe McDonagh Cup Round 3 clash with Westmeath in TEG Cusack Park, Mullingar on Saturday afternoon, Throw in 3pm. 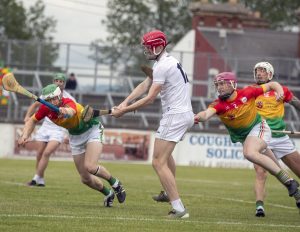 James Burke scoring one of his two goals against Carlow in the Joe McDonagh Cup Round 1 game at St Conleth’s Park Photo: Sean Brilly

Paul Divilly, who missed the opening game against Carlow, two weeks ago, has recovered from injury and will take his usual place at midfield, where he will be joined by captain, Brian Byrne. Meanwhile Johnny Byrne, who had to leave the field at half time against Carlow, with a suspected hamstring injury, has recovered in time to take his usual position at centre half forward.

In a change in the forwards, Cathal McCabe, who started against Carlow and has had two tough U20 Leinster championship matches against Carlow and Wexford, is not included on Saturday and he is replaced at right corner forward by Confey’s Colm Chan.

Kildare started brightly against Carlow and were four points to the good inside the first 10 minutes and but for some wides late in the half they might have been much closer than the 0-11 to 0-8 deficit at half time.

Each time Carlow looked like pulling away Kildare fought back in that second half with three long range frees by Jack Sheridan being expertly finished to the net by James Burke (two) and substitute, Caolan Smith.

Westmeath, for their part, operated in Division 1 of the Allianz Hurling League in 2021 and although they lost all their games the experience of playing against such opposition will have done them no harm at all. They accounted for Carlow by 0-23 to 0-18 last weekend, for their first competitive win of 2021.

That victory puts the Lake County in the driving seat for qualification for next Saturday’s final in Croke Park as Kildare have to defeat them by more than eight points to guarantee that they would reach that final. In another scenario Kildare would have to defeat Westmeath by more than two points to push Carlow into the relegation play-off position.

A tall order in both instances you might thing but Kildare have been in these sort of situations in the last few months defeating Down in the Christy Ring Cup Final and then Mayo to win the Allianz Division 2B title. Manager David Herity talked about being in the Joe McDonagh final when the draw was announced a few months ago and he didn’t deviate from that talk despite the loss to Carlow two weeks ago.

The victories by the U20 and Minor hurlers over the last two weeks will have given the seniors a massive boost so you can expect that they will give their all, and more, to play in Croke Park on Saturday next.