One Change On Kildare Minor Team For Carlow Match

KILDARE Minor Manager, Cyril Kevlihan, has made one change to his starting 15 for Saturday’s Electric Ireland MFC Quarter Final against Carlow in St Conleth’s Park, Throw -in 12 noon. 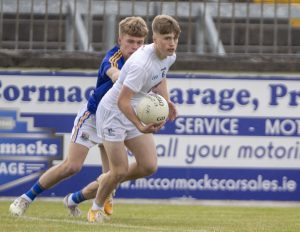 Dual player, Cian Boran, who was one of the stars of the minor hurlers in their defeat of Laois on Wednesday night, misses out with a consequent shift in positions among the defenders. Eadestown’s Boran left the field late in that Laois game so perhaps he is carrying an injury, although he has been listed among the substitutes for Saturday’s game.

Killian Browne (Celbridge), who came on as a substitute in the defeat of Longford two weeks ago, retains his place for this one.

Speaking of that opening game Kildare had a very good 4-10 to 1-12 victory over Longford with forwards, Gavin Thompson (1-5) and Elliot Beirne (1-3) contributing 2-8 between them on the day. Kildare looked powerful at times in that game although they did dip a bit also, at times, as only to be expected for their first game in the championship.

Carlow for their part had a good win over Wicklow in Netwatch Cullen Park two weeks ago. In a high scoring game they just got the better of the Garden county by two points, 3-14 to 2-15, so they showed their scoring potential in that one. They are managed by former Baltinglass and Wicklow player, Damien McMahon, who now has connections with Palatine in Carlow and he was part of the Carlow senior management team with Kildare’s, Anthony Rainbow, and later with Turlough O’Brien.

Cyril Kevlihan, showed all his experience at schools and underage football in honing this Kildare team into a stylish victory over Longford and if they can sustain their effort over the entire game on Saturday then it would be expected that they would reach the Leinster semi-final where they would face the winners of Dublin and Offaly.