Gallant Kildare U20 Hurlers Bow Out Of Leinster

DESPITE another massive 12 point haul from the stick of  centre-half forward, Liam Dempsey, on Tuesday evening in O’Connor Park Tullamore, Kildare bowed out of the Leinster U20 Hurling Championship at the hands of Offaly. The Eire Og Corra Choill man was matched on the evening by his Offaly counterpart, Jack Screeney. 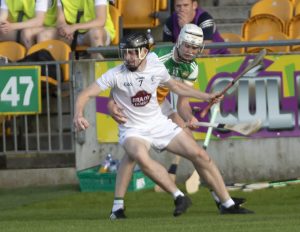 Paul Dolan, who scored the winning point against Carlow two weeks ago was again one of the stars for the Kildare U20 hurlers in O’Connor Park, Tullamore. Photo: Sean Brilly

It was probably a game too far for Pat English’s men, or to be more precise a final 15 minutes too much as up to half time and probably up to the 50th minute no one would have foretold that Kildare would succumb to the Faithful county and certainly not by a 12 point margin.

Thanks to 0-9 from Dempsey and two points from Daragh Melville Kildare and Offaly went in a 0 – 11 at the break each with Screeney among Offaly’s top scorers. Kildare had led from the 9th minute of the game.

Dual player, Muiris Curtin, put Kildare a point up again a minute after the restart but unfortunately that was as good as it got for the Lilywhites. Once DJ McLoughlin put Offaly ahead in the 34th minute they never looked back and as well as the Screeney scoring machine they had a good spread of scorers in Tom Dooley, McLoughlin and Charlie Mitchel and Joe Ryan.

Kildare craved or needed a goal but it never came and it was the home side who raised the first green flag just after the second half water break when the Kildare defence was opened up by an Offaly run which finished with McLoughlin firing home past Sean Burke in the Kildare goals.

As Kildare legs and minds tired further Offlay piled on the scores and raised the green flag again on 32 minutes through Joe Ryan. Kildare did get a consolation goal from substitute David Qualter with the last puck of the game and although Kildare were bowing out of the championship at least they were doing so on a positive note.

The journey has ended for this brave team but they won so many admirers on the journey and gave a new belief to Kildare hurling. Many of them are sure to feature on the Kildare senior team in the coming years.