WEXFORD minor hurlers ensured that lightening didn’t strike twice in the underage ranks as they avenged the previous week’s shock defeat to Kildare at under-20 level with a five-point win over the Lilywhite under-17’s in the Leinster Quarter Final on Wednesday evening in St. Conleth’s Park. 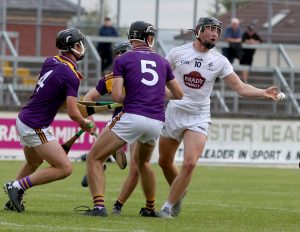 Despite the scoreline, Kildare, who had already disposed of Carlow and Laois in this competition, were highly competitive for much of the game and really put it up to the Yellowbellies in the first half despite conceding a goal within the first 17 seconds to Luke Roche.

The home side scored three well-executed goals of their own, the first of which on the stroke of half- time sent them in a point ahead (1-6 to 1-5) at the break, Séamus Kelleher applying the crucial deft touch to Ciarán Mangan’s to long ball. Wexford, though, may have been rusty in the first half of their opening game of the campaign but raised their game a few notches in the second period. Kildare looked to have struck a significant blow in the 36th minute when Daniel O’Meara’s pass was deftly flicked by Niall Dolan to Alan Tobin with the Naas man finishing brilliantly to the net.

That put Kildare 2-7 to 1-8 ahead but Wexford would outscore them by 1-8 to no score over the next 20 minutes to take a stranglehold on the game, the Yellowbellies’ second goal a brilliant individual effort from Simon Roche on 52 minutes which stretched their lead to nine points.

Eoin Stapleton’s side finished strongly though and the excellent Cian Boran produced a superb pass across a crowded penalty area which picked out dual player Fionn Cooke and he finished to the net for the third Lilywhite goal.

Stapleton afterwards would rue some missed opportunities in the first half in particular and felt Wexford were tactically astute, moving their best players onto his star men after the opening period. That need to be more clinical and a little bit cuter has been a common theme over the course of the last week, despite the significantly improved performances of Kildare teams this year.

Wexford march on and will meet Dublin in the semi-final next week while Offaly and Kilkenny meet in the other last four encounter.