King Of The Fairways 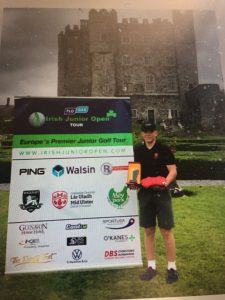 THE success of the “underage” structure and coaching at Athy Golf Club was demonstrated in earnest on Tuesday when John King won the U18 Flogas Ireland Irish Junior Open with a top class score of 74. The event was held at Kilkea Castle Golf Club in Co Kildare.

In addition to John’s success Athy GC had further great performances from Mikey Hurley, who came 4th in the U14 competition, and young Jack Conlon, who represented the club in the U7 Competition.

John King now lies in 6th place on the Flogas Irish Junior Open Summer Tour U18 Leaderboard while Mikey Hurley lies in 7th place on the U14 Leaderboard. Tuesday’s success for Athy GC can be credited to the likes of Leo Fitzgerald and Deirdre Sunderland and their work, with others, on the club’s thriving Junior Golf Programme.