SNOWFALL will attempt to become the 15th filly to complete the Oaks double following her record breaking 16 lengths success at Epsom, when she lines up in the Juddmonte Irish Oaks this Saturday at The Curragh. 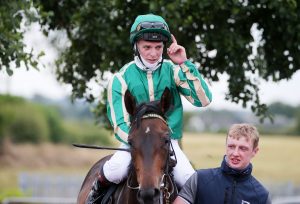 The Aidan O’Brien trained daughter of Deep Impact is among 8 fillies who will line up in the Group 1 Classic, following today’s confirmation of runners. O’Brien will also be represented by Divinely, La Joconde and Willow in the race.

8 runners will line up in the Paddy Power Sapphire Stakes including the Johnny Murtagh trained Measure of Magic who finished third in the Group 1 Commonwealth Cup at Royal Ascot. Other notable contenders for the Group 2 contest include Logo Hunter, Romantic Proposal, Gustavus Weston and Make A Challenge.

There are 6 runners in the Jebel Ali Racecourse and Stables Anglesey Stakes including recent Curragh winner Beauty Inspire, together with Hadman, Celtic Times, Daisy Peer, The Entertainer and Andreas Vesalius who are all previous winners.

Speak in Colours heads the 19 declared to run in the Paddy Power Scurry with multiple stakes winner Speak in Colours set to carry top weight of 10 stone. Gulliver is the sole British trained runner

There are 10 runners in the Kildare Village Ladies Derby, won last year by Princess Zoe, while 7 runners go to post in the Dingle Whiskey Nursery Handicap, 12 in the Juddmonte “Expert Eye” EBF Maiden and 5 runners  in the Aquaturf Handicap which brings the race day to a close