Hurling At Home In Kildare – The Supporter

IN this week’s Kildare Nationalist, out now, The Supporter has hurling very much on the mind but is cautious about the footballers against Westmeath.

FOOTBALL didn’t make it home after all but has hurling found a new home in Kildare? The noises from Hawkfield about the underage talent coming through have been getting louder of late but it would have been beyond your wildest dreams to imagine Kildare under-20’s and minors accounting for Carlow (twice), Laois and Wexford in the Leinster Championships over the past couple of weeks. 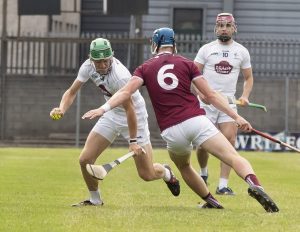 It doesn’t get any easier with the minors now up against a forewarned Wexford and the under-20’s facing another resurgent county in Offaly in Tullamore tonight (Tuesday). Whatever happens this week, though, the last few months have felt like a real breakthrough for the game in the county. If it were just one team, or one result, you’d talk about that poor one swallow that gets scoffed at, but it appears now as if the bar has been raised on a consistent level among teams at all grades of the game within the county.

The Wexford result of course raised the most eyebrows outside of the county, and rightly so, the Yellowbellies team containing eight members of the 2019 Leinster Minor Championship winning side. Perhaps they under-estimated us, perhaps they were under-cooked given this was their first game. Whatever, this was still a seismic result in Leinster hurling.

A few things struck me about that game. Firstly, the Kildare team were physically stronger and bigger than their Wexford counterparts, something that a Carlow supporter also highlighted to me about all of our underage teams of late. But it’s not just about brawn. All of these Kildare teams are showing huge skill levels, dexterity and a coolness and confidence under pressure that’s highly impressive. More than that, though, you won’t see a more courageous act of defiance this year than the one produced by the under-20’s when down to fourteen men and going behind to their vaunted opponents heading into injury time last week.

It wasn’t just the coolness under pressure that Liam Dempsey displayed to equalise with that free, but straight from the puck-out, energy and desire helped turn over possession, providing Dempsey with the opportunity to etch his name in the history books with that superb point from near the left corner. Snatching victory from the jaws of defeat is not a trait Kildare are traditionally blessed with so this was significant and welcome.

Unfortunately, despite proving themselves thoroughly capable of competing at Joe McDonagh Cup level the senior team learnt a harsh lesson in both their games. The McDonagh Cup is an unheralded jewel in the GAA crown. It may be under-promoted and starved of coverage by the national broadcaster but once again this year it has produced high-scoring, dramatic games without the basketball-like mundanity that have become common at the Liam McCarthy level.

Against Westmeath, Kildare had every chance to snatch a place in the McDonagh final, or at least to secure the narrow win that would have preserved their hard-earned status in the second tier. But despite probably the best performance they’ve produced under David Herity, the Kildare lads just weren’t clinical enough in front of the posts to take advantage of the dominant spells they had, particularly in the first half

On the plus side, the guts shown after Westmeath’s second goal augurs well for the future of this team and they’ll need that in spades in the relegation play-off against Meath. It’s impossible to overstate the importance of that game now, as a return to Christy Ring level would undo much of the good Herity’s work with Kildare has produced.

Meath looked like a relatively manageable opponent for Kildare after our promising performance on Saturday afternoon but the Royals’ shock (but deserved) win over Kerry that evening put a completely different complexion on our chances. Hopefully the two narrow, agonising defeats have not sapped confidence among the panel. I doubt it.

On the football front we had another impressive performance from Cyril Kevlihan’s minors on Saturday. You can’t argue with the ten goals they’ve put past Longford and Carlow now but you’d imagine we’ll be up against it against Dublin in the semi-final in two weeks’ time. This team has some powerful boys in it, with a talented midfield duo and a forward line with a sprinkling of stardust in it.

I had a chance to watch a recording of the seniors’ outing against Offaly and the big concern I have was how much we struggle to impose ourselves on a game we should be winning comfortably enough. Yes, Offaly are improving and Division Two will do them the world of good next year, but as they showed in the League final against Derry, they are still some way short of the level Kildare would aspire to.

Yet Kildare looked leggy and lethargic and I really don’t buy the argument that three weeks without a game should leave them like that. The truth was Offaly, despite their heavy schedule and extra- time the week before, were more energetic and more enthusiastic for the fray in the first half. The big difference after the break was the level of energy, particularly from the backline, in breaking forward with pace. Suddenly, the likes of Eoin Doyle, David Hyland and Kevin Flynn were penetrating the Offaly backline and giving them problems to solve, creating space as they did so for the forwards.

Looking ahead to Westmeath on Sunday, we certainly owe the Lake County one, not alone due to 2016 but they’ve had those last gasp wins against us in the under-20 football and McDonagh Cup in recent weeks. I’d love to say I am confident about this one but I am not. Westmeath are showing a little more ambition than we saw when they came to Newbridge in the National League last autumn and, despite their relegation to Division 3, they’ll draw confidence from that 2016 semi-final win at Headquarters.

The venue is a huge issue for me. Eight games in a row now we’ve lost at that place and no matter what the players say it has to be something that plays on their minds. Can they find their shooting boots there? Can they maintain the defensive improvement on those wide-open spaces? Are our midfield mobile enough? Are the forwards clinical enough?

Westmeath will have no such qualms about playing in Croke Park and they will feel they got the best draw possible, having been pitched in against Dublin in the opening round of the winter championship. Hopefully, the footballers can draw inspiration from the hurling fraternity and find it within themselves to nail that Croke Park hoodoo once and for all.

Which brings us to the Ladies team and their superb win against Roscommon on Sunday. After the disappointment of the league and the injuries to the likes of Roisín Byrne, Tríona Duggan and Ellen Dowling they showed bravery and composure to earn the win in Roscommon. With two teams coming out of Group 3 that puts Daniel Moynihan’s panel in great shape to qualify for the quarter finals. They’ll want to beat Laois in their second group game, though. There’s history there.