By Eoin Beatty
TWO goals in either half of this game helped Maynooth to a nine-point win over Naas in the semi-final of the 2020 Haven Hire Junior Championship. The victory for the men from the north of the county in Manguard Plus Kildare GAA Centre of Excellence, Hawkfield on
Thursday evening set up a mouth-watering final between themselves and Sarsfields, after the latter defeated Wolfe Tones at the same venue. 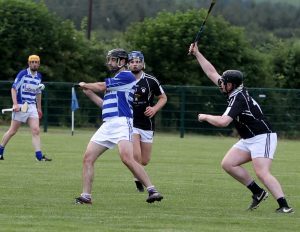 Maynooth raced into an early lead as they dominated the opening exchanges; hitting 1-6 without reply. Corner-forward, Adam Jordan, was proving very difficult to handle for the Naas backline, and chipped in with three of the first six points as well as setting up John Gaule for the game’s first goal.

It took Naas all of 14 minutes to register their first point and, like buses, two came in quick succession, both from the hurl of Enda O’Neill.
The two sides then traded two excellently worked goals. First, Cathal O’Donovan fired the ball into the back of the net from long range for Maynooth to extend their lead to 10 points, before O’Neill responded for Naas, coolly slotting the ball past Luke Murnane between the
posts.

Naas continued to chip away and hit a purple patch of their own after the water break and scored 1-3 without response as the momentum began to swing in their favour.

Then a somewhat innocuous ball was played in to the Maynooth full-forward line and was deflected behind the end-line for a 65’ and from that 65’, Adam Jordan stepped up and somehow looped the ball into the back of the net, over the head of Naas goalkeeper Liam Mockler.