KILDARE Manager, David Herity, has kept faith with the team that started and then came agonisingly close to defeating Westmeath to earn a Joe McDonagh reprieve in the Relegation battle with Meath in Parnell Park on Saturday afternoon, Thrown – in 3pm. 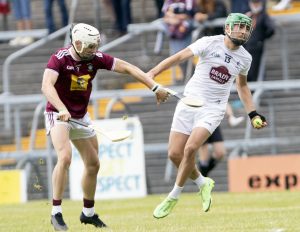 In reality, barring any injury from last weekend, you couldn’t see it any other way as the 15 who started, and the six substitutes, gave an outstanding performance in the white jersey that had them at times looking like the Joe McDonagh Cup team rather than opponents, Westmeath.

It was the little things that caught Kildare out, Herity said after the game, but he will also be mindful that, for the second game in a row, a number of opportunities to put scores on the board, especially just before half time, were spurned.

Cathal Dowling had an outstanding game against Westmeath and more of the same will be required o Saturday. That game will also have improved the fitness levels of Paul Divilly and Johnny Byrne, both recovering from injury.

It might have been a close call that the likes of Caolan Smith, Kevin Aherne and Shane Ryan didn’t get starting berths but they, and others, make a powerful impact whenever introduced off the bench. The fit again, Mark Delaney and Gerry Keegan, are great assets to have also as Herity resisted the temptation to include some of the heroic U20 players for this one. There will be another day.

Meath, for their part, had a poor League campaign and lost their opening Joe McDonagh Cup game to Down but they caused a surprise by beating Kerry last Saturday evening. Jack Regan, always a dangerman against Kildare, and Patrick Conneely, were their top scorers in the 28 points haul against Kerry.

If Kildare play with the same passion, style and intensity as they have done to date then they will play in the Joe McDonagh Cup again next year, and deservedly so.