THE day has finally arrived. Kildare qualified for the 2021 Leinster Final on 1 August and in doing so laid the hoodoo that was Croke Park victories for the first time since 2016 with a two point victory over Westmeath in the Leinster SFC semi-final on Sunday. 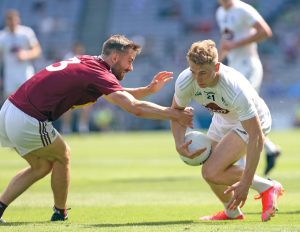 A goal apiece by Jimmy Hyland on 43 minutes and Daniel Flynn three minutes later put Kildare six points in front with Flynn setting up the Ballyteague man and the All Ireland U20 winner returning the compliment by setting up the returning Johnstownbridge man.

Despite that respectable lead Kildare were hanging on towards the end as Westmeath fought back and outscored Kildare 0-7 to 0-2 in the final 25 minutes or so. The Lake County also recorded 10 wides in the second half, at least half of them in the final 10 minutes or so.

With Kildare just leading by a point in the 64th minute following John Heslin’s ninth point, eight from frees, substitute Shane O’Sullivan scored a wonder point for Kildare which eased the Kildare worries and ensured the two point victory.

Kildare started with Daniel Flynn and Alex Beirne in place of Conor Hartley and Darragh Kirwan, with Paddy McDermott (Naas), a second half substitute, replacing Kirwan in the match day squad.

It was nip and tuck in the first half with Neil Flynn leading the scoring stakes for the Lilywhites with 0-6 (5f) and John Heslin replying for the Lake County, also with 0-6 (5f) in a half where the sides were level on six occasions. Kildare led o-11 to 0-10 at the break and Heslin brought them level again a minute after the restart before Kildare took control with those two goals before withstanding the Westmeath recovery.

Kildare lost Kevin Feely in late in the first half with a knee injury and Eoin Doyle in the second with what looked like an hamstring injury. Both will now be doubtful for the Leinster Final.