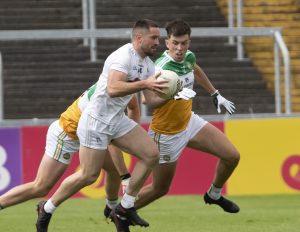 Ben McCormack’s work rate was one of the features of the win over Offaly Photo: Sean Brilly

No substitutes have been named as yet so that has given rise to speculation and rumours that there may be late changes in the forward line. Apart from the obviously unfortunate, Paul Cribbin, who is injured and Luke Flynn, who is reported to be on a two game suspension, Kildare are at full strength for Sunday so who might make way for whom is anyone’s guess, should the named team not be the one that starts.

Croke Park hasn’t been a happy hunting ground for Kildare in recent years and Westmeath were the beneficiaries of this malaise when the sides last met in the Championship in 2016. Should this prey on the players minds? No it shouldn’t.

Kildare won promotion to Division 1 for 2022 and accounted for a committed Offaly team in the Leinster Quarter Final so they should be playing like a team that can take pride in these accomplishments. What should worry Kildare though, is the apparent fade out in the final quarter in the league games against Clare and Meath and against Offaly in the Championship,

For sure that has been talked about at the training sessions and team meetings in the last number of weeks but the only ones who can eradicate this are the players on the pitch in the final quarter and those introduced by the Management team, should they notice a final quarter dip on Sunday.

Mark Donnellan has turned out to be a top class, commanding goalkeeper, maybe the best in the country now, and he has in front of him a sextet of defenders who are tight markers and intelligent distributors of the ball. Aaron Masterson and Kevin Feely have renewed their midfield partnership to good effect.

Up front Ben McCormack and Conor Hartley are the work horses with the other four capable of scoring or dominating the scoring as Neil Flynn did against Offaly.

Westmeath, although relegated in the League, were unlucky to suffer that fate and caused a lot of teams a lot of problems. They had a convincing victory over Laois last time out and have good players throughout the pitch although some Westmeath supporters worry that their defence can be too attack minded and thus neglecting their defensive duties.

Ray Connellon and Sam Duncan are big but mobile midfielders and we all know what Ger Egan and John Heslin can do but it’s the unknown qualities of the likes of Denis Corroon and in particular, Ronan O’Toole, that might worry Kildare.

Sunday promises to be very warm and energy sapping in Croke Park and the team that manages that and the two water breaks will go along way to facing Dublin or Meath in two weeks time.

Kildare have the players on the pitch and on the bench as well as a Management Team that can manage a long awaited Croke Park victory. Managing Referee O’Mahony’s interpretation of the rules might warrant attention too.